Are you ready to explore the meaning of the 7 chakras? Let's get to it!

Chakras have origin in Eastern European religions and they have now become commonplace in Western culture. They are centers of energy that move inside human bodies to provide a balance of energy.

Long before science and technology, the cultures in the ancient times knew that there are items that carry energy within their bodies for good life balance.

The Chakras as Energy Centers

They are placed at 7 different points of the human body and they are all interconnected to each other through glands and organs.

If for any reason a chakra is blocked, it cannot give energy and this is the beginning of mental imbalance which can lead to ailments.

This is because the harmony of the 7 chakras has been disrupted and the body is no longer functioning at its required level.

The official name of this chakra is Muladhara and it comes from the words Mula which is root and Dhara which means support hence the root support.

What the root chakra means for you

The role of this chakra is to connect your energy with the other through the grounding process.

This chakra helps with our everyday survival while we are here on earth. Its central role is to give us everything we need to survive.

In the modern era, this is equivalent to emotional security and financial freedom.

It is depicted by the color red. It is located near the tailbone at the base of the human spine.

The benefits of the root chakra are that it gives people a sense of accomplishment and serenity with basic needs such as money, shelter, and safety.

There is no worry about these things and one gets a feeling of connection to their human experience when they fully understand this chakra.

When this chakra has an imbalance you are likely to experience daydreaming and general lack of focus in your life because of the lack of connection to the earth.

Want to read more in depth about the root chakra? Click here. 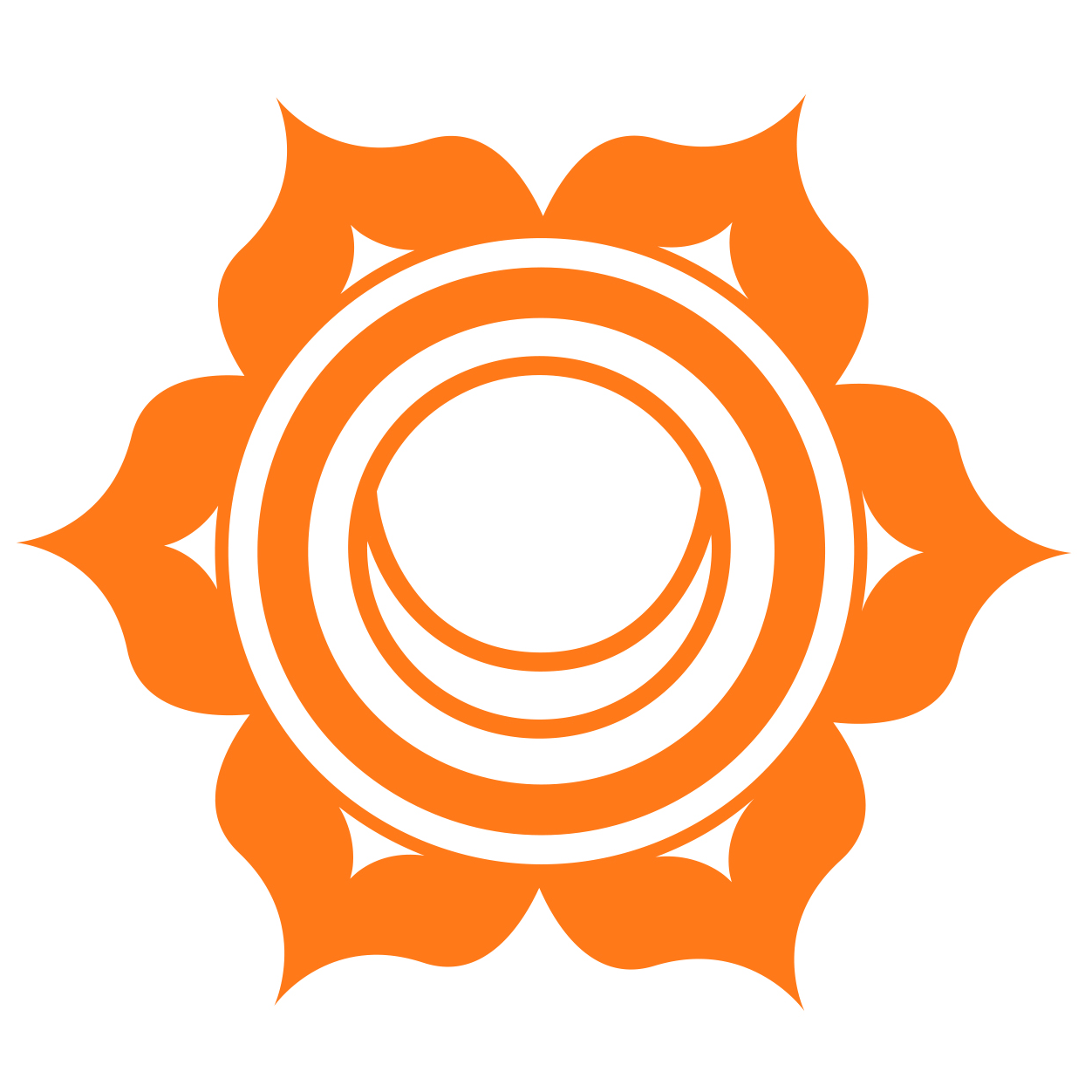 The sacral chakra is also known as svadhishana which translates to "the place of the self."

It is about your identity as a human being and what you are up to with your identity. Therefore, this chakra is responsible for the bringing of creative energy that helps to enrich your life.

What the sacral chakra means for you

This chakra is responsible for the bringing of creative life force that enables you to enjoy life while on earth.

This energy helps you enjoy what the world offers after a long day of labor including seeking pleasure in sex and intimacy.

It is depicted by the orange color and located below the human's belly button.

When this chakra has a balance, you will get pleasure from the things offered by life for this purpose such as sex and food which will give you wellness and abundance.

When there is an imbalance with this chakra, you will turn to addiction to the pleasures of the world and may engage in bad things like gluttony.

To know that there is an imbalance, you will notice that you enjoy things that do not nourish the soul and you will have symptoms such as addiction and obesity.

This is also called Manipura which translates to a lustrous gem. This chakra depicts where your identity, personal power, and confidence are born from.

What the solar plexus chakra means for you

Whenever you are in a situation and can feel that something is not right with you the feelings come from this chakra. It is what other people refer to as gut while in reality, it is from this chakra.

It is the seat of personal power where you can feel the confidence and wisdom physically from the universe.

This chakra is depicted by color yellow and is located at the center of the belly button and extends upwards near the breastbone where your ribs connect.

With a balance of this chakra, there is a feeling of a sense of decisiveness, wisdom and power from within.

It is a feeling comparable to that of a warrior because it brings in the confidence to win life's battles.

When this chakra is blocked you will experience low self-esteem. When it is overused, you are likely to experience too much energy that leads to anger, micromanaging others and lack of empathy.

To ensure balance with this chakra, you should practice the opening up of your heart with love and compassion by meditating about love and kindness from the heart to those you are close to.

This chakra is also referred to as the Anahata chakra. Anahata means unhurt.

What the heart chakra means for you

This is the chakra that empowers your love, being passionate and considerate of yourself and others.

The reality is that everyone associates their hearts with love and this is what this chakra is about; love to self, others and it is hence associated with healing and good health in our lives.

It is represented by the green color.

Its location is at the heart's center moving down the breastbone and up the throat. Since it's in the middle of the 7 chakras, it connects them through heaven and the physical world.

A balance in this chakra makes you love yourself and in turn extend that love to others even during difficult times in your life and that of others.

When there is an imbalance in this chakra, we make unhealthy love choices by putting the needs of others before us at our detriment thus making the wrong choices.

You can thus experience issues with interpersonal relationships. You will get a feeling of being out of touch with others and may lead to loneliness.

This is the 5th chakra which is also called Vishuddha translating to very pure.

What the throat chakra means for you

This is the chakra that gives people the voice of personal truths. It gives the voice and the energy to speak out. The throat does the production of the voice but the inner quality comes from this chakra.

It is located above the heart and connected to the compassion and love for self and others. Its center is between the collar bone and it shines from the heart to the eyes center.

It is depicted by the color blue.

A balance in this chakra helps you with clarity of words for every situation thus inspiring those around you.

Clarity of words is important to our daily lives because they enable us to communicate our innate feelings to others.

When we lack this clarity we are not able to let the world know exactly what our feelings are and we may end up feeling ignored and coil into depression.

When there is an imbalance with this mantra, it is manifested by a feeling of invalidation of your opinions and doubts in expressing yourself which might make you want to speak louder hence interrupting others.

The best way to exercise balance for this chakra is thinking before talking.

This is also referred to as Ajna which means beyond wisdom.

It is depicted by the color indigo and located at the center of the eyebrows. It shines down to the mouth and up to the top of the head.

What the third eye chakra means for you

It opens the human mind to know more than what they see in the material world. It brings about intuition, psychic energy, and extrasensory perception.

A balanced 3rd eye chakra makes you feel in sync with both the physical and the spiritual world.

You will thus be able to receive information from the psychic world just like you do from the 5 senses in the physical world.

Therefore, you should take the time to remind yourself that you should continually nurture this chakra by connecting your body to the earth each time you have time.

This is also called Sahaswara that translates to a thousand-petaled. It is pure consciousness of energy and works like magnetism.

Consciousness energy is in the world and connects us to the entire universe but not visible to the naked eye.

What the crown chakra means for you

Personal consciousness is located in this chakra but it's more like a seed of the universal energy and therefore not something personal to an individual.

It is depicted by the white color and located at the top of one's head. It moves between the eyes and moves upward and outward to connect you to the energy in the rest of the universe.

Every spiritual warrior's goal is to balance this chakra but it is not an easy thing to do. That is why it is said that those who achieve it conquer the world and its suffering.

The journey to achieve this chakra brings happiness, great health and is one sure way of achieving all the other chakras because it holds them together.

Of course, it is the journey of attempting to achieve this balance that brings us happiness, good health, and wisdom. An attempt to bring balance to the 7th chakra will balance all the other chakras automatically.

An imbalance in the crown chakra will block you from experiencing universal truth at its full extent.

I hope you got a basic understand about the meaning of the seven chakras. Be sure to check out the specific articles for each chakra if you want in-depth knowledge.