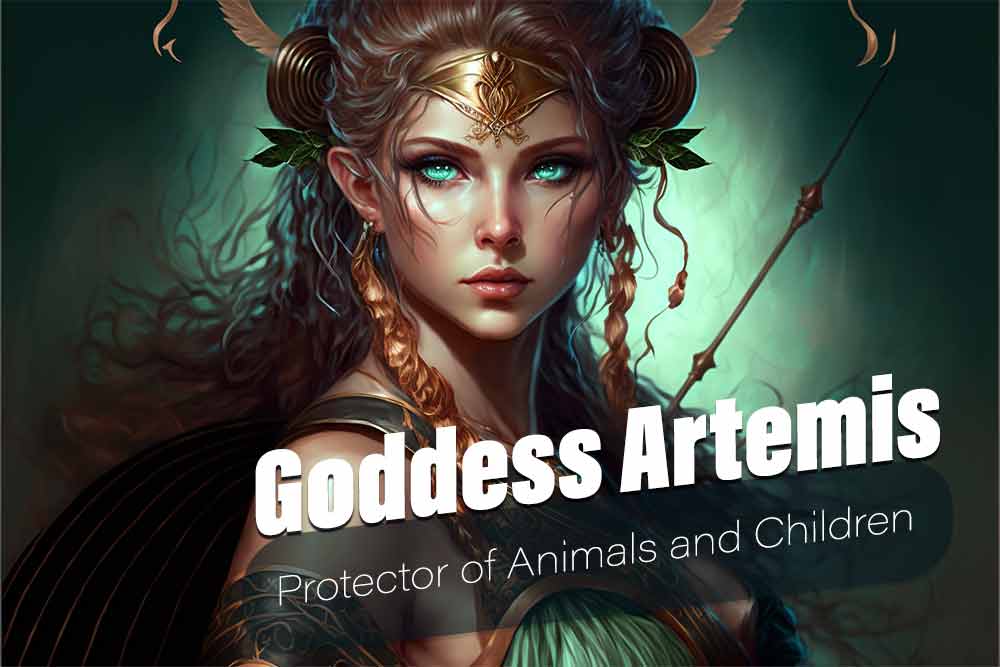 Artemis was the goddess of the hunt and wild animals in Greek mythology. She was also associated with virginity, childbirth, fertility, and the protection of young girls.

She was depicted as a huntress carrying a bow and arrows.

Artemis was one of the most widely revered deities in Ancient Greece. Her temples were some of the most important in the region.

She was associated with many symbols, including the moon and deer. Her name means "safe journey" in Greek, and she was often invoked for protection on journeys. 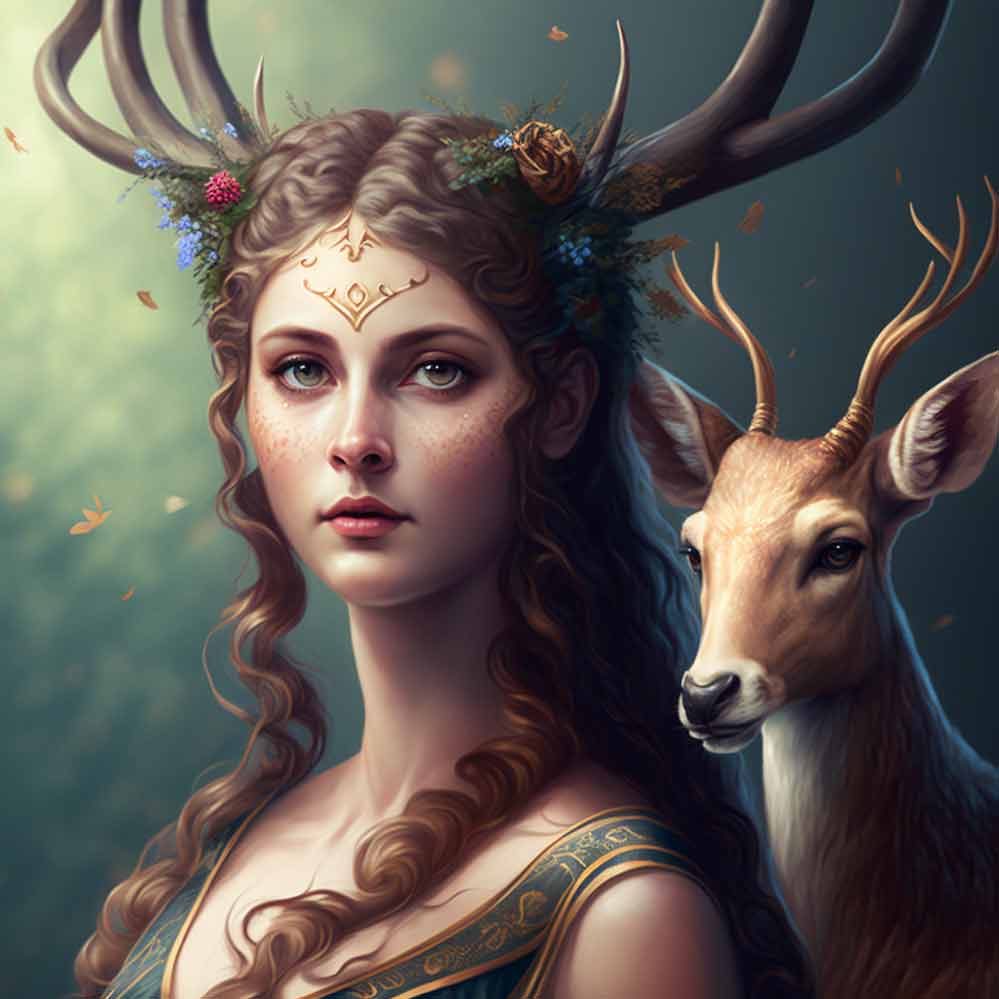 Artemis had a strong connection to nature and animals, particularly deer. She is often seen accompanied by a deer or other wild animals in artworks from ancient Greece.

She also protected women during childbirth and helped them through difficult times.

Artemis was a powerful goddess who embodied strength, courage, and independence. Her followers admired her for her power and beauty, which was said to surpass all other goddesses combined.

It is no surprise that she became so widely revered by ancient Greeks throughout their history. Her myths were often told and retold in literature and art, making her one of the most recognizable deities of Ancient Greece.

In short, Artemis was a significant figure to the ancient Greeks and represented many powerful qualities. 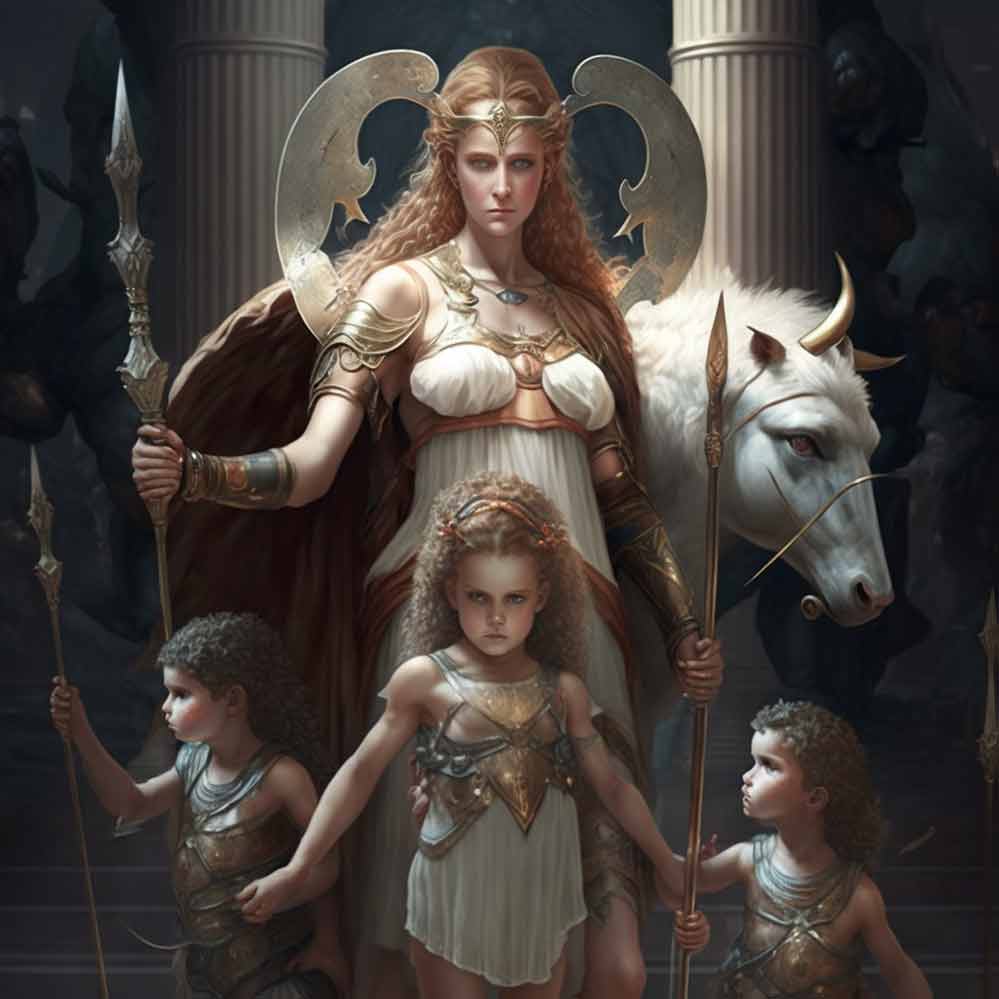 Those who know Artemis invoke her for the protection of children and animals.

She was a protector of women, children, and wild animals and a symbol of strength, courage, beauty, and independence.

To this day, she remains an influential figure in Greek mythology that inspires people worldwide.

What role did she play in Greek mythology?

Artemis was an important figure in Greek mythology. She is often seen as the leader of the hunt and protector of young children, women, and animals.

She was also associated with fertility and childbirth, making her an important figure for many women throughout Ancient Greece.

Her mythological role also included helping to keep balance in the world through her power over hunting and wild animals.

She could sometimes use her arrows to bring justice or punishment for wrongdoings. In some tales, she was also responsible for punishing humans who killed one of her sacred deer.

In addition to protecting nature and bringing justice, Artemis had a solid connection to childbirth and assisted in delivering newborns safely into the world.

She was said to have been present for the births of some great Greek heroes, including Herakles and Perseus.

Artemis was an essential character in many Ancient Greek myths and played a vital role in protecting the natural world and assisting with childbirth.

She is still an influential figure to this day and continues to inspire people around the world.

What were her symbols?

Artemis had several symbols associated with her that signified various aspects of her character.

The crescent moon was one of her most recognizable symbols and represented her power over nature and animals, particularly deer.

Deer were also considered sacred to Artemis and frequently appeared in statues, artworks, and other depictions of the goddess.

She was also often seen carrying a bow and arrow, representing her prowess as a huntress.

Other symbols of Artemis included the cypress tree, which was associated with virginity, and the laurel wreath, which symbolized fertility. In addition, she is often depicted wearing a short tunic or dress made from animal skins. This represented her connection to nature and animals.

In summary, Artemis' symbols were closely connected to her role in protecting nature and assisting with childbirth.

Her crescent moon symbolized her power over the natural world, while her deer symbolized the sacredness of wild animals.

Her symbols continue to inspire people around the world and serve as a reminder of her power, beauty, and strength.

What is her legacy?

The legacy of Artemis lives on through the stories and myths involving her character that continue to inspire people from all walks of life throughout history.

Through her mythological role as a protector of nature, animals, women, and children, she serves as a reminder that even in uncertain times, courage and strength can prevail when working toward justice. 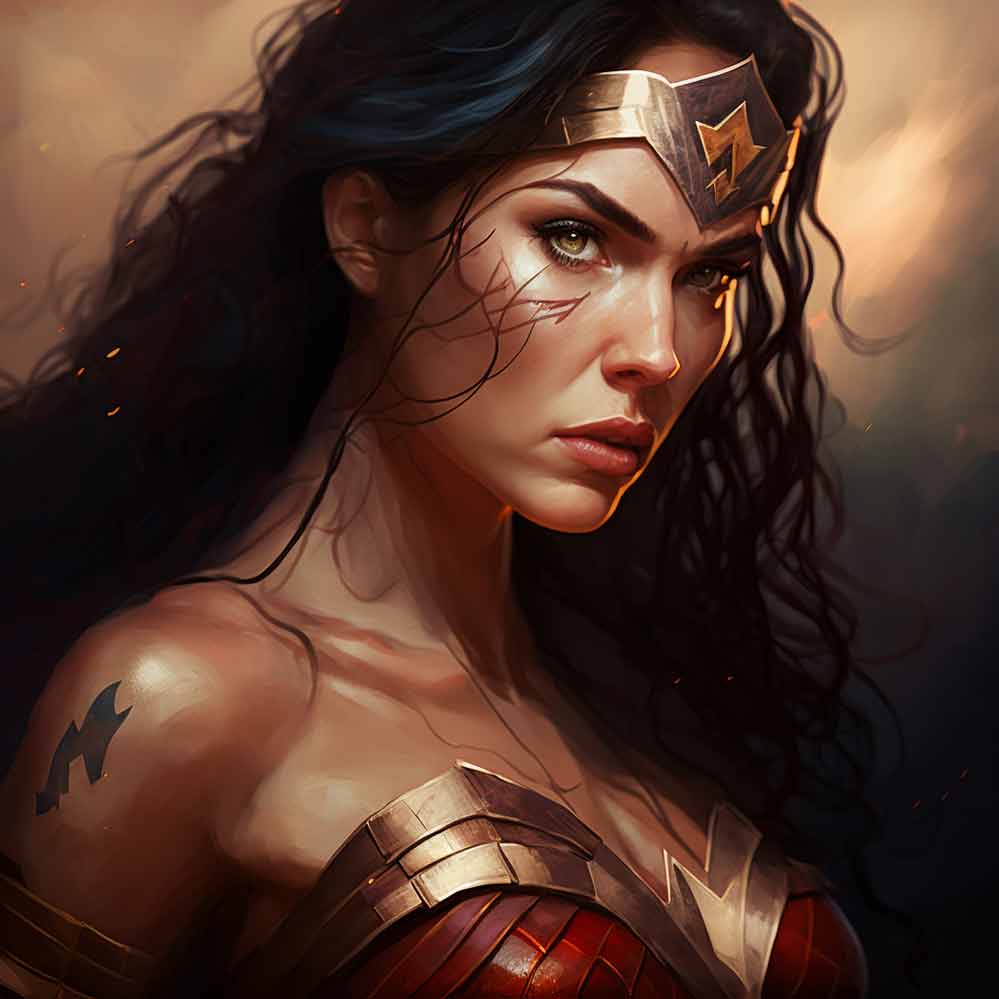 Many modern heroines like Wonder Woman have taken inspiration from Goddess Artemis.

Today, her legacy is reflected in popular culture, such as in film and television. She has been depicted in various media, including Wonder Woman, Xena: Warrior Princess, The Hunger Games, and Percy Jackson movies.

Her name has also been used to honor schools, organizations, monuments, and other places of importance.

What are some of the most famous Artemis stories?

The stories of Artemis have been passed down through the ages in Ancient Greek mythology.

Some of the most famous and influential tales involving her character include "The Birth of Apollo and Artemis," "Artemis and Orion," "Diana and Actaeon," "Callisto," and "Apollo and Daphne."

The story of "Diana and Actaeon" is particularly well-known as it tells the tale of a hunter who accidentally came across Artemis while she was bathing in the woods.

As punishment for seeing her naked, Artemis turns him into a stag, eventually killed by his own hunting dogs. This story serves as a reminder to respect boundaries and not intrude on people's privacy.

The "Callisto" story is also important and tells the story of a young woman who was transformed into a bear by Artemis after she rejected her advances. This tale illustrates how powerful and unpredictable the goddess could be.

Overall, these stories continue to influence people worldwide while serving as reminders of the power and strength associated with Artemis' character.

They have been passed down through generations, providing valuable lessons about respecting boundaries and accepting responsibility for our actions.

What does Artemis represent?

Artemis represents strength, courage, justice, and independence. She is often seen as a protector of the natural world, animals, and women. 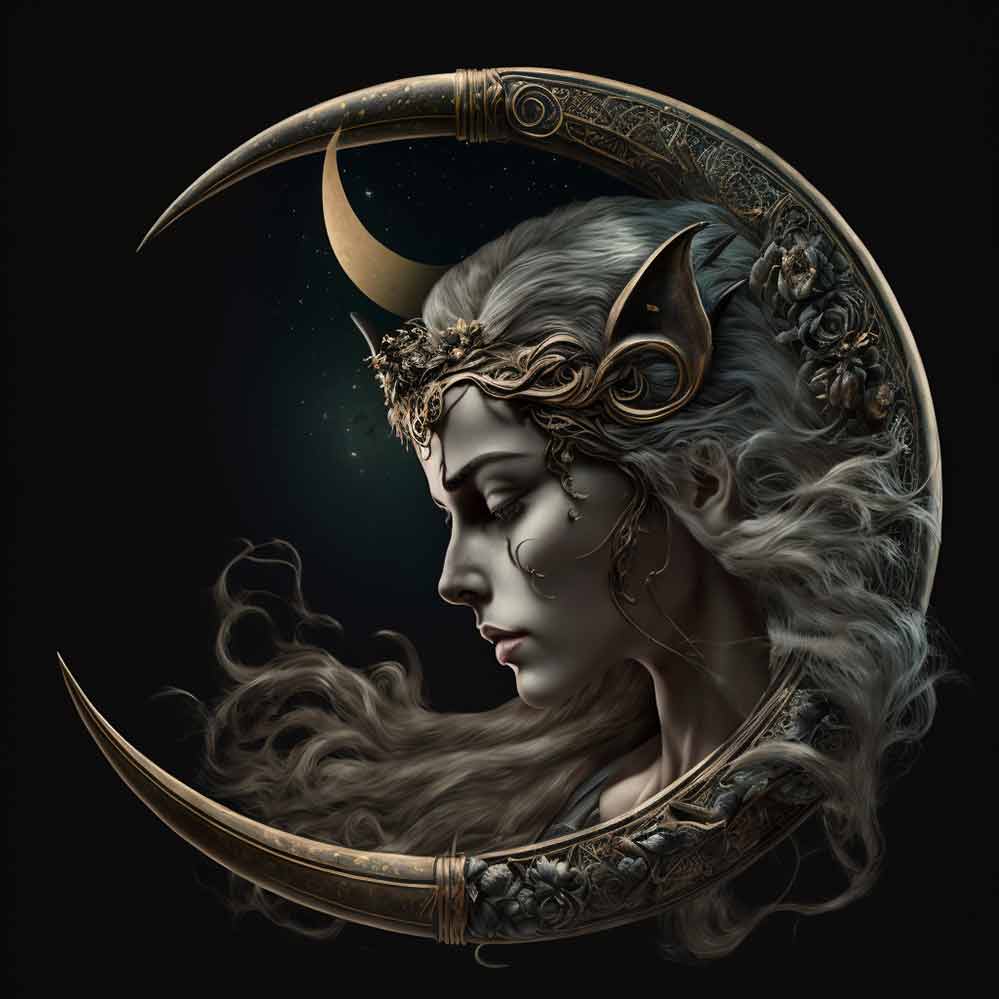 Artemis and the crescent moon.

Her symbols—such as the crescent moon and the deer—signify her close connection to nature and her power over it.

She also serves as a reminder of how important it is to respect boundaries and take responsibility for our actions. These values are still relevant today, making Artemis' legacy an inspiring one that continues to touch people worldwide.

Her symbols remain deeply connected to her roles in protecting nature, animals, and women while reminding us to respect boundaries in all aspects of life.

The stories involving her have been passed down through generations providing us with valuable lessons that remain relevant today.

How can we apply her teachings to our own lives? 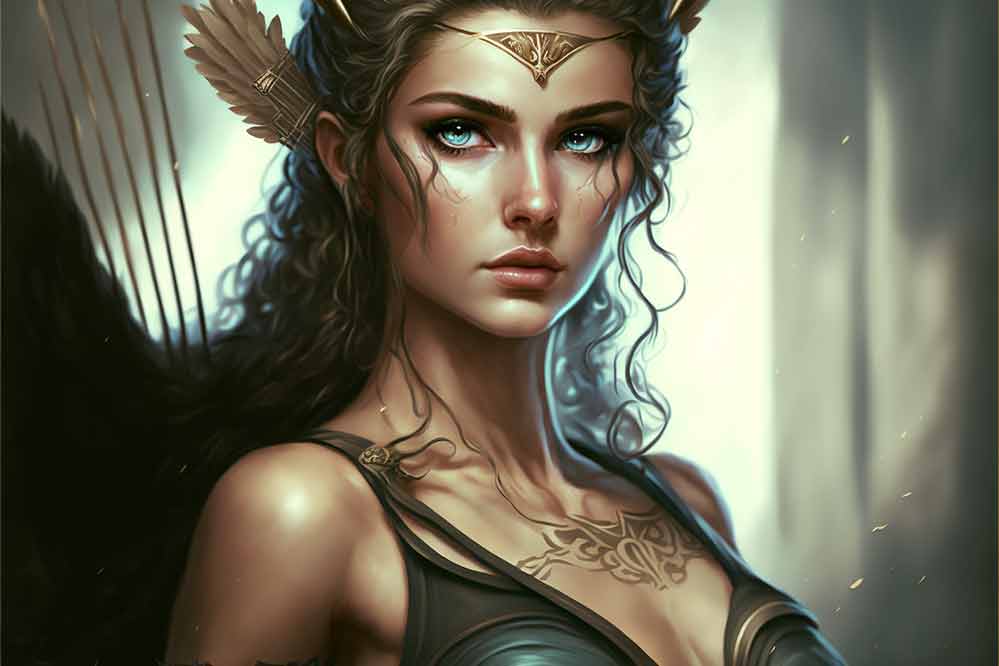 The story of Artemis teaches us about courage and the importance of standing up for what we believe in, even when it may seem impossible.

It also shows how taking responsibility for our actions can help restore balance and justice in the world. Furthermore, her stories remind us to respect boundaries and be mindful of other people's privacy.

We can apply these lessons to our lives by courageously pursuing our goals and respecting others' boundaries.

We should strive to balance our desires and those of others, refusing to intrude upon someone else's space or trespass against them.

We should also remember that if mistakes are made, owning up to them is necessary to right wrongs and restore balance and justice.

Taking these lessons to heart will help us lead more meaningful lives inspired by the legacy of Artemis.

Where can we learn more about Artemis and other Greek goddesses?

There are many books and websites dedicated to Artemis and other Greek goddesses.

Ancient texts such as Homer's Iliad, Theogony by Hesiod, and the Library of Apollodorus provide detailed accounts of their stories. Additionally, several online sources, including websites like Wikipedia and Theoi Project, offer comprehensive information on each goddess.

Finally, scholarly articles, essays, and books provide helpful insights into their legacies. All these resources can help us better understand the decisive role played by these figures in Greek mythology.

What is the relevance of Artemis today? 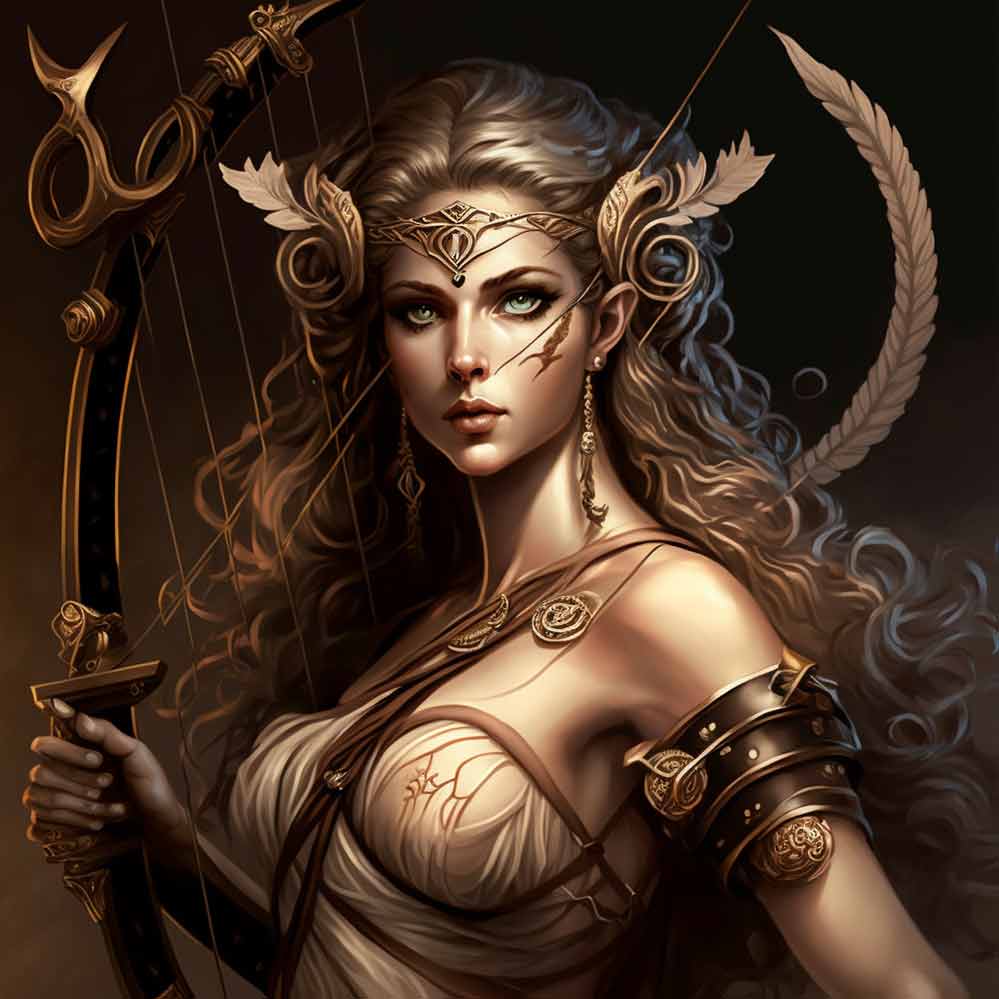 The legacy of Artemis continues to be relevant today as her values—such as courage, justice, respecting boundaries, and taking responsibility—remain essential in our lives.

She is an inspiring figure that serves as a reminder of the power and strength associated with feminine energy. Her stories remind us to stay true to ourselves and accept responsibility for our actions.

This has made her legacy timeless, as it continues to influence people from all walks of life.

In short, Artemis' teachings remain meaningful in today's world and serve as timely reminders about how we should conduct ourselves in various situations.

In conclusion, Artemis is a significant figure in Greek mythology who has left behind an enduring legacy of courage, justice, respect for boundaries, and personal accountability.

Her symbols remain deeply connected to her roles in protecting nature, animals, and women while reminding us of the importance of standing up for what we believe in.

Her teachings are still relevant today, making her legacy an inspiring one that continues to touch people worldwide.

By reflecting upon her story, we can gain valuable insights into our lives and lead more meaningful ones inspired by her wisdom.