7 Facts About the God Vishnu 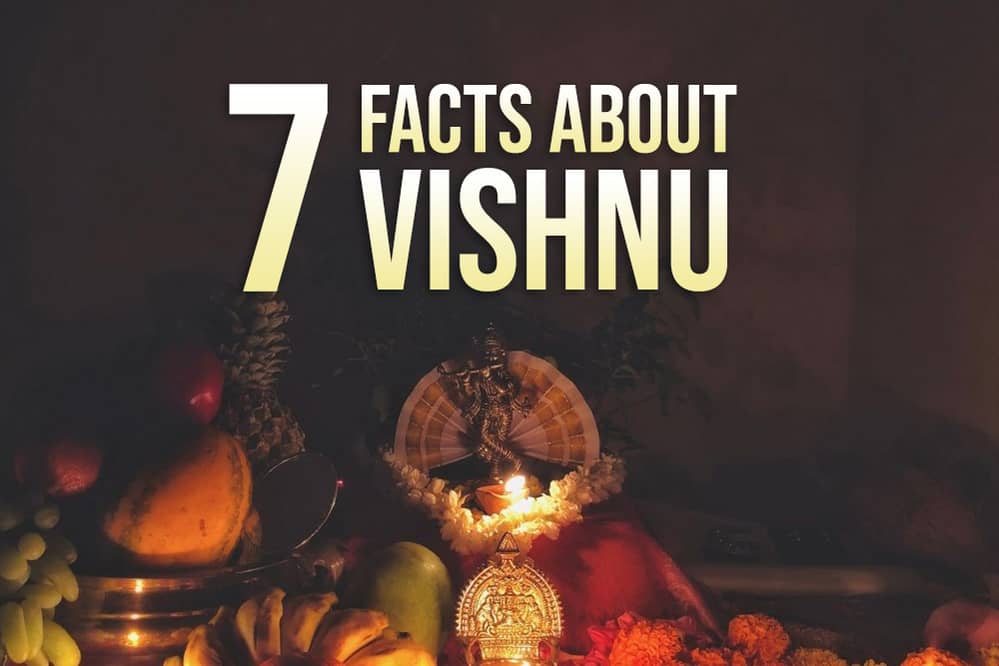 Vishnu is known for being supreme and powerful. Vishnu is the most famous God in the Hindu religion. Devotees worship Vishnu and all his incarnations to achieve success in different spheres of life.

Also, lord Vishnu is a part of the Hindu Trinity. This trinity has three gods. They are Brahma, Shiva, and Vishnu. When Shiva is known for being the destroyer, Brahma is the creator, and Lord Vishnu is the preserver.

Vishnu is more popular among the devotees since he saves mankind from the devil's powers and hostile forces. When Lord Shiva can destroy the world, Vishnu can save it. The preserver protects the world and keeps it away from all the evil powers present in the surrounding.

Even if Lord Vishnu is popular among Hindu devotees, we can always learn more about Him. In the following, we will cover seven facts about Vishnu. You can go through them to know your God in a better way.

1. Vishnu Is the Creator of Lord Brahma

Do you know who created Brahma? Yes, it is Vishnu who was behind the birth of Brahma. A few of us are aware of this. Brahma was born from the Vishnu's navel.

What picture comes to your mind when you think of Lord Vishnu? We imagine Him Sleeping on a snake bed. While sleeping on His bed in the ocean, the Lord went into Yoga Nidra for ages. When the Lord got up, He saw a lotus flower on His belly. The flower gave birth to Brahma. When Lord Vishnu saw Brahma, He expressed His gratitude. After the birth, Lord Brahma created the world, and Vishnu took the responsibility of saving the world. 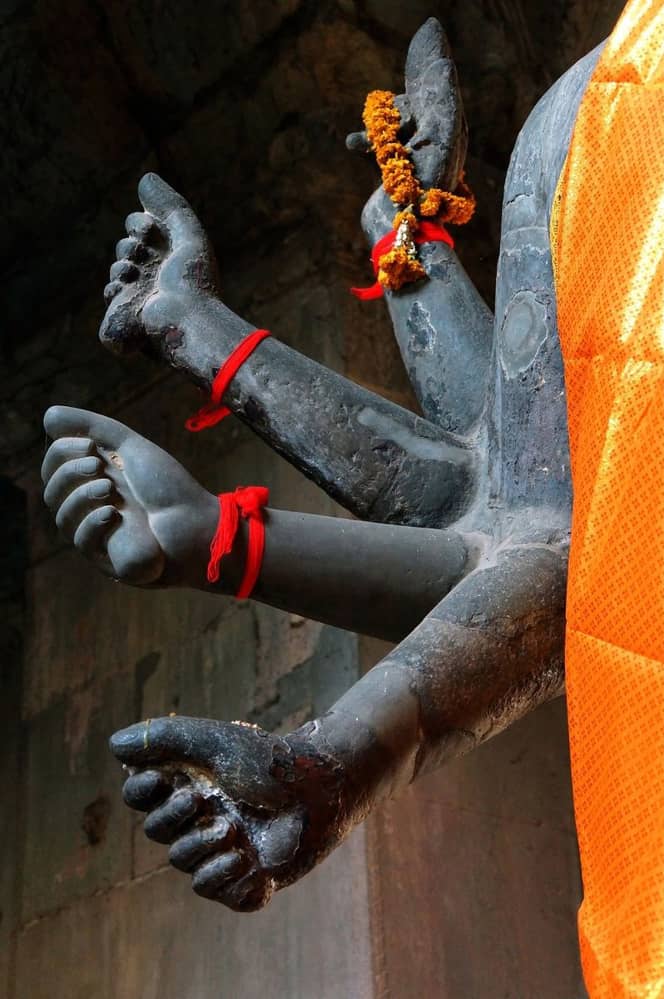 Vishnu has four arms, and many of us are aware of this. However, a few only know the meanings and responsibilities of each hand. The four arms say that Lord Vishnu is the most powerful and can protect the world from negativity and devils. His pervasive nature makes him the most admirable.

When it comes to arms, He has two arms in front and two in His back. The two arms that have in His back indicate His connection with the spiritual world.

You might have seen a conch shell held by His upper left hand. The shell has the power to maintain and create the universe. Also, the shell is known as panchajanya that represents five elements: fire, water, air, sky, and earth. Apart from the shell, you might have seen a Chakra held by His upper right hand. The Chakra works to destroy the ego and awaken spirituality. 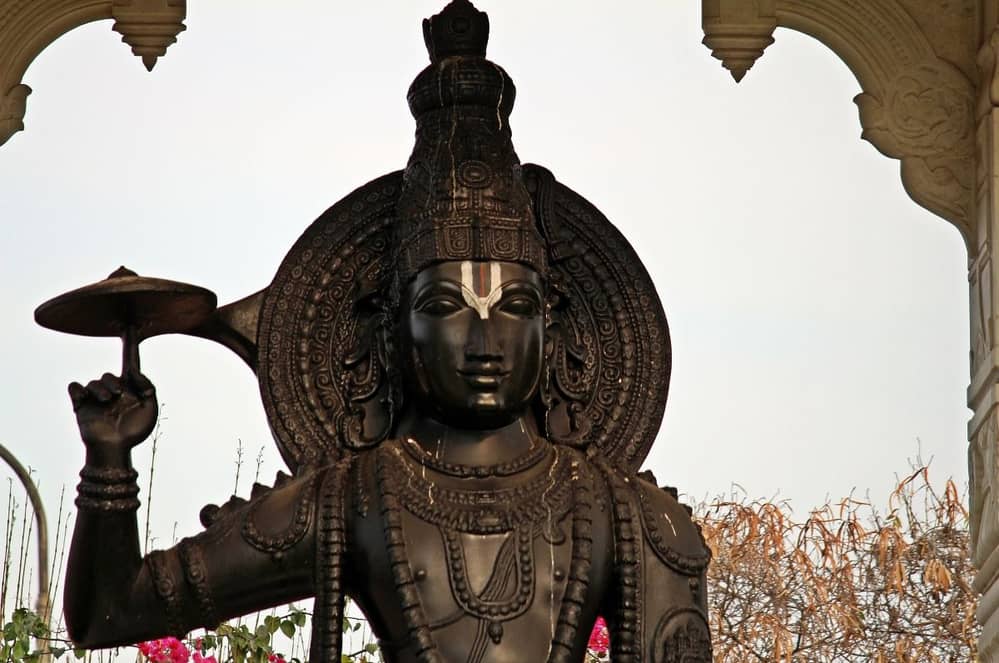 Vishnu spinning the sudarshana chakra in his right hand.

There is a lotus flower held by His lower left hand. It is connected with spiritual liberation, purity, and divine perfection. Vishnu has a Gada in His right lower hand, and that symbolizes power and authority.

You might have heard about the Vishnupad temple. This temple is famous for having a 40cm footprint of the God Vishnu. The temple is also known as the Dharmasila. The imprint has nine symbols that include Gada, Chakra, and Shankha (cells).

The temple is located beside the Falgu River. It is a popular destination for those who worship Lord Vishnu and feel blessed by seeing his footprint. Also, it is believed that the temple symbolizes Lord Vishnu's weapons. The footprint (Vishnupad) is imprinted on solid rock, immured in a silver basin.

4. Vishnu Has a Female Avatar 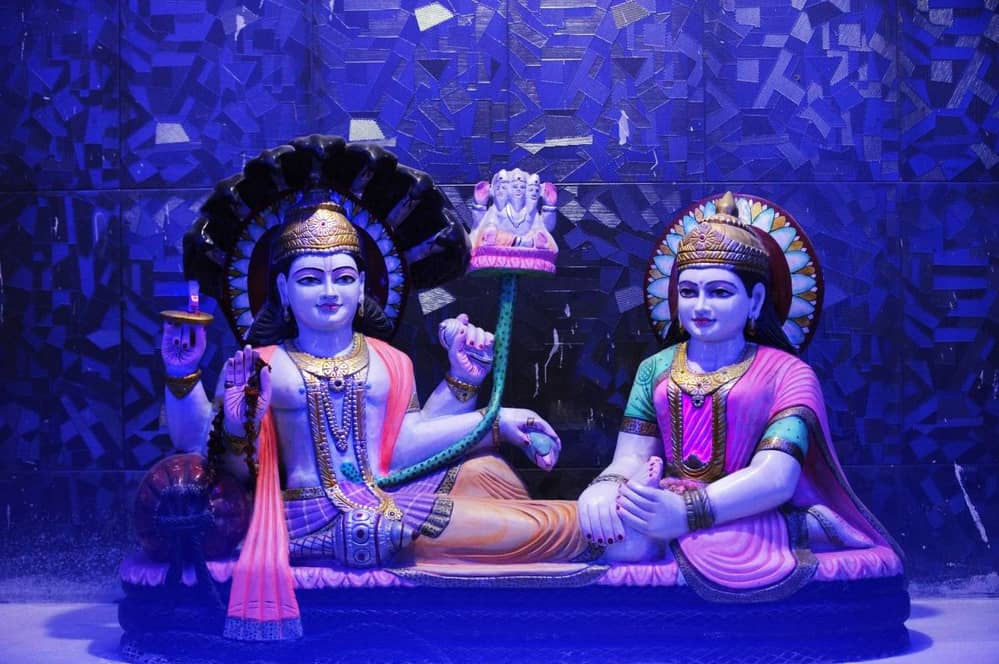 Many of us know that Vishnu has taken 23 incarnations. Also, it is believed that He will take His 24th incarnation in Kaliyuga. However, you might not be aware that Lord Vishnu had taken a female avatar known as Mohini.

The myth says that Mohini played an essential role during the Samudra Manthan. Devatas got amitra during the Manthan. But, Mohini played a trick to save amrita from asuras and give it to devatas. Vishnu took a female avatar and diverted the attention of asuras.

Asuras could not drink amrita, and devatas had it and became immortal. She was looking so beautiful in the female avatar. Even Lord Shiva was attracted towards her.

We all think that Vishnu is powerful and supreme, and no one can harm Him. However, the supreme Lord was cursed by Bhrigu. The curse was considered as one of the harshest curses that were given to any God.

Once Bhrigu and Sukracharya were away, and asuras took shelter at the Bhrigu ashram. When the sage was not present, asuras requested his wife, Kavyamata, to protect him from devatas. 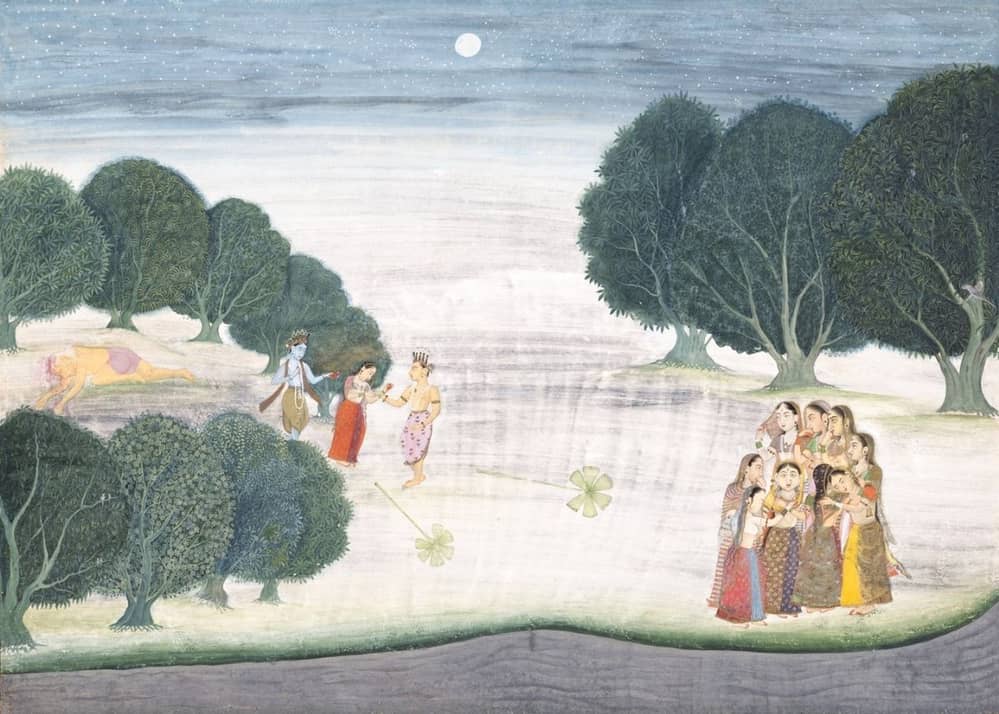 Vishnu is depicted conquering his foes.

When Bhrigu returned home and saw his wife's death, he got angry, and then he cursed Lord Vishnu for killing a woman. He cursed Vishnu to take birth on the earth many times and go through the pain of birth and death. Therefore, Vishnu has taken many incarnations, unlike Lord Shiva and Lord Brahma.

The preserver of the world, Vishnu, is destined to take twenty-four incarnations. Twenty-three incarnations were meant to save the world and people from devils and evil powers.

In Bhagavata Purana, the twenty-three incarnations are explained in detail. Every time, he incarnated in a different form to save mankind. The last incarnation will happen in the Kaliyuga, and that will be the end of the Kaliyuga.

We know our God as savior and protector. He is omnipresent and can save devatas and all living beings. The preserver Vishnu can protect us from all kinds of troubles. His name justifies His role.

The word Vishnu has come from the root "Vish," which stands for "to pervade and to enter." He is an eternal element and that you can feel in all the things present in the world. That makes Him all-pervasive.

As stated in Vishnu Sahasranama, Vishnu's name is derived from the root, and it spreads everywhere in the world.