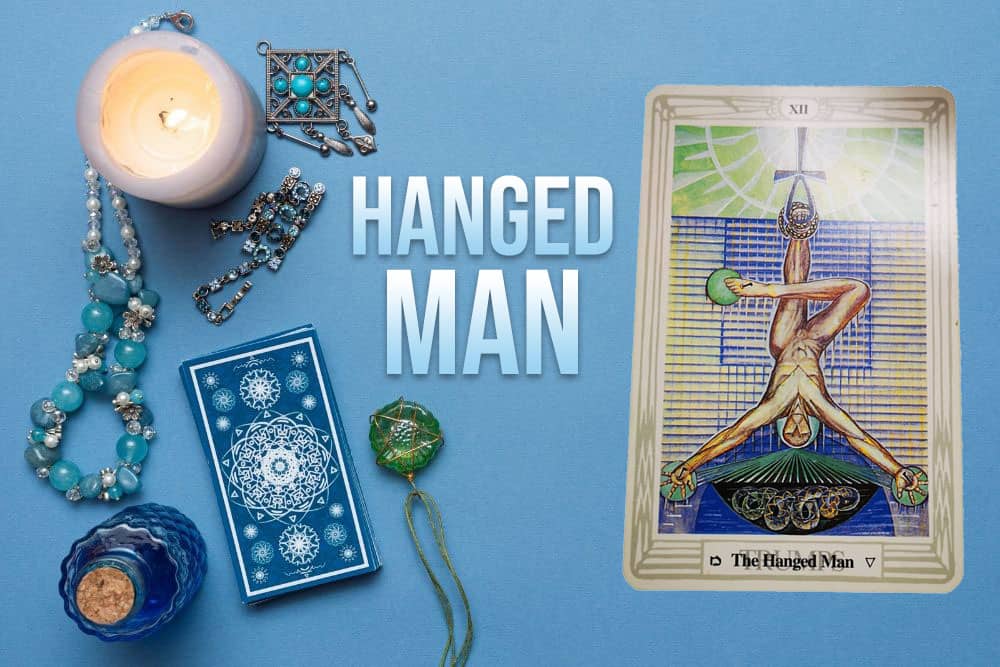 The tarot the Hanged Man is the 12th Major Arcana card in traditional decks. The Hanged Man means waiting patiently, striving to gain a new perspective, and the ultimate sacrifice.

The picture of the Hanged Man is a figure that’s suspended or hanging from the world tree in an upside-down fashion. In particular, only the man’s right foot is tied to the tree, while the left one is behind it with a bent knee. The arms are positioned the same way - both are behind the man’s back and form an inverted triangle.

Furthermore, the Hanged Man has a golden halo around his head and sports a calm look, which signifies that he was tied with his own free will.

What Does The Hanged Man Mean in Tarot?

Having a Hanged Man show up in an upright manner means that you must take a break or pause from what you’re doing to open up new opportunities and meaning.

Despite today’s world, where fear of missing out is real, and you can’t stop working or doing something, the Hanged Man seems counter-intuitive.

However, this respite is ultimately beneficial, so you can find enlightenment, gain a new perspective and advance with a renewed purpose and meaning.

A Hanged Man appearing in a Tarot reading means your life is about to hit a sudden stop and that you should welcome it with open arms. Ignoring it and continuing can prove detrimental to your life, including essential aspects such as relationships, wealth, and health.

Single people shown the upright Hanged Man means they shouldn’t rush to find true love. Those in relationships expect a sacrifice in some form or a trial that will strengthen the partnership and further increase the bond.

The same meaning applies to a career. Don’t rush to complete a project or work your way to a promotion sooner than expected. Take the time to relax, step back and learn something new. It could prove to be invaluable to your success later on.

A reversed Hanged Man signals from the Universe that the wait is over, and now is the time to act.

Hopefully, after a brief respite, you’ll have learned something new and are itching to use it. When this card is revealed, you should now focus all your energy on moving forward.

In love, the Hanged Man reversed means you should make changes, whether you’re single or in a relationship.

For those in a career, it’s a sign that you should stop procrastinating and move towards self-improvement or even think of branching out to a new job or side hustle.

For wealth, a reversed Hanged Man generally means that you should venture out into the investment or purchase you’ve been considering for a while. It could also mean frustration due to your financial assets not generating the desired return.

For example, it could be a failed business venture. Hopefully, you’ll have learned a few valuable lessons that you can apply to your next experience.

It is all about waiting for the right time.

This is not the right time for single people to rush loving someone and giving into someone you've only been dating for a week or two.

It would be better to be patient as the right one will come along in due time. It is never wise to force yourself into someone when they do not like you back.

It would be best to wait for the right moment, and you will meet someone who will love you right back.

You can also need help in your relationship when you are into one. For example, seeking a therapist could be the best decision you've ever made to save your marriage, even if it means spending a lot of money on it.

You know it would be worth it in the end.

Now is not the right time to force a decision in your career. You can just be waiting for the right move, and everything will fall right into place.

You need to think a lot about what you are doing in your career, and after some critical thinking, you should take that next step forward. It will no doubt lead to bigger and better things.

It seems like now is the right time to do something that will change everything for the better.

Besides, it is something that will surely make you want to consider doing things you've never done before. The change would impact many things around you, but it would be better.

Learn more about other tarot cards!