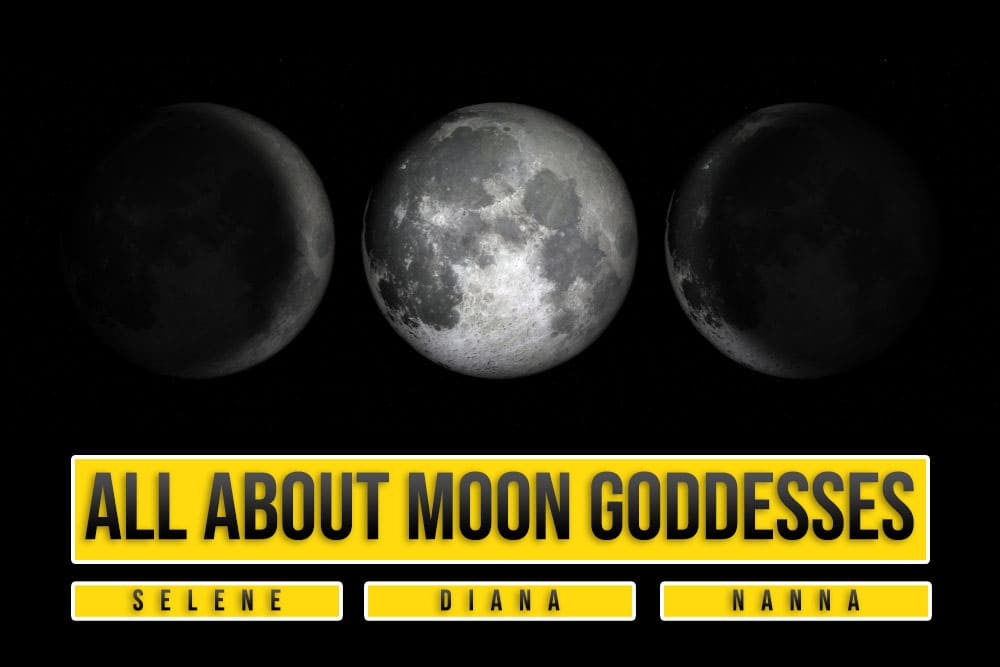 Moon goddesses have been worshipped in many places throughout human history. Collections of rich stories portraying moon goddesses' celestial lives explore the depth of human beliefs and religion.

More than this, these goddesses' spiritual and alternative energies live on to tell the tale.

Most if not all of the cultures around the world celebrate the retelling of the stories of their deities and goddesses. Essentially, these tales symbolize how the moon was perceived across different cultures.

The moon is seen as the harbinger of the night. Its changing phases remind humans of the impermanence of life and the constancy of change.

Lunar deities were conceived from pagan cultures. For thousands of years, people have seen the moon's existence in the vast night sky.

Often, these goddesses are associated with powers tied with the celestial energies of the moon. It is no wonder that myths about moon goddesses sprang to life.

There is undeniable energy drawn from the magnetism of the moon. As it influences the movement of the tides, the moon's potent magnetism even influences our feelings and emotions.

Believe it or not, the moon can harness our innermost energies and channel them into the deepest recesses of our beings.

Let us look at these celestial moon goddesses across different cultures.

Representing change and phases of life, the goddess Titan Selene is regarded as the all-seeing eye of the pitch-black night sky.

During new or full moons, Selene is worshipped in the vast sky of the night. Being considered a Titan, Selene's spiritual and immortal powers are unmatched.

She can grant fertility, inspire love and passion, twist reality, and create illusions.

In ancient Greek mythology, Selene's powers also reach the realm of dreams and nightmares. Harnessing someone's psychic abilities and intuition is attributed to the influence of the Titan goddess, Selene.

With her chariot steered by magnificent white horses, Selene crosses the night sky in her lengthy, flowy silver hair and crescent crown.

Selene's all-knowing spiritual trait is inescapable. As she brightens the otherwise dark night sky, the goddess oversees everything that happens in the world.

More than this, the goddess endows eternal sleep to humans by withholding the presence of the sun god, Helios. In all its entirety, Selene is the embodiment of constant change.

As the moon changes its form and phase, Selene personifies the impermanence of life and everything that we hold dear in our hearts.

Like her siblings, the Sun god, Helios, and the Dawn goddess, Eos, Selene's personification as a moon goddess left an indelible mark in ancient mythology.

She is often portrayed as the moon incarnate in many pieces of literature. Even in today's writing, the Titan moon goddess has a reputation to uphold.

Most gods and goddesses of Greek mythology are dedicated to pantheons and temples.

Worshippers often build structures to appease and pray for their patron's blessing. However, Selene's pantheon is in the far-reaching scope of the night sky.

People worship her in the sky, and her omnipresent figure has left a spiritual mark of an all-seeing eye in the realm of gods and goddesses. 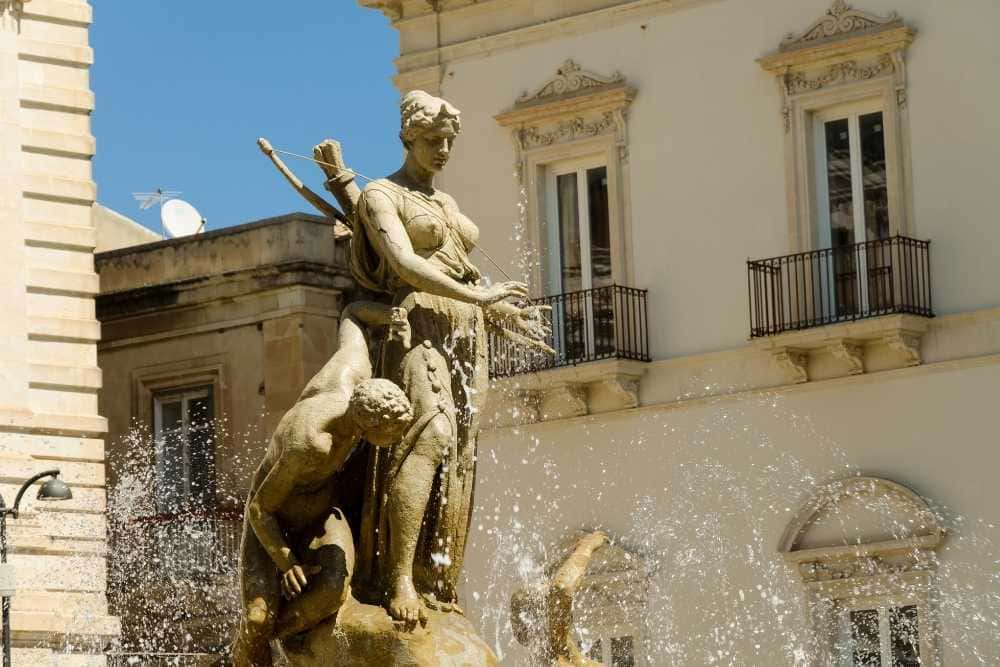 This fountain in Sicily, Italy, is dedicated to the goddess Diana.

Hunting, light, and virginity. These are the divine traits associated with the Roman goddess of hunting and moon, Diana.

As the goddess of the moon and hunting, Diana has supreme abilities.

As Diana often stays in the woods, her impassability and indifference to the real world paved the way for her to protect animals, the wildlife, the innocent, and the young.

The goddess also championed the lower-class citizens and enslaved people of Rome. A slave presides in her temple to lead the worship to the goddess herself.

The goddess' cult is as old as the beginnings of the magnificent city of Rome.

Diana's spiritual divination to ease childbirth and conception has been invoked by her worshippers.

She cements the energy of a fertility goddess. More than this, the goddess herself gives off a solid and aggressive spiritual power.

Her purity, agility, strength, and prowess as a goddess illuminate divine energies in women. In contemporary art and literature, Diana embodies feminism.

She is seen as the archetypal goddess of free will, independence, and strength, which attracts women to worship and adore her.

Diana's undeniable sense of adventure has impacted how people worship her energy and guidance.

The Roman goddess of the moon and hunting is still revered today. A young girl with free spirit and will, moving at her own pace far from the reach of the natural world, strives to create a life of her own.

Diana shuns the troubles of the natural world; instead, she thrives in the company of animals and the wildlife in the woodlands.

Indeed, this moon goddess is one of the leading figures in mythology that continue to influence today's perspective on women.

Heng-o: The Mother of Twelve Moons

In ancient Chinese tradition, people believe in the existence of the twelve moons as there are twelve months present in a year.

The mother of these twelve moons is Heng-O. In Chinese mythology, Heng-o would bathe each of her child's moons before their journey would commence.

The "mother of the moons" prepare each of her child to ride on a chariot and travel to the East side of the world.

Heng-o's portrayal as a mother reflects her divine trait of motherhood, care, and responsibility.

However, in the Taoist tradition, Heng-o represents the yin. The yin represents the dark, chaotic, female part of the yin-yang dichotomy. This belief stemmed from the story when Heng-o stole her husband's immortal potion.

As she also wanted to live an eternal life, Heng-o took it upon herself to drink the potion. But, she could only get far just to reach the moon.

With her name that equates to "rainbow," Ix Chel is the goddess that celebrates the moon, healing, and sex.

In the ancient Mayan tradition, Ix Chel is strongly linked to the fertility of harvest and prosperity of the fields.

These two dichotomous personalities symbolize the divine traits of the moon goddess, Ix Chel. Also, this represents the responsibilities tied to women.

Ix Chel is a moon goddess that emits a spiritual inclination to guide women to accomplish their duties in life while maintaining a love for craft and the arts.

Nanna: The Sumerian Moon God of Ur

So far, this article has been about moon goddesses, but I'd like to introduce you to one culture that worshipped the moon as a male energy.

In Mesopotamian religion, the moon god Nanna was the center of worship in the ancient city of Ur. Within this city, cattle herds first worshipped the moon god as they shepherded their cows and oxen under the dark night sky.

Initially, Nanna was first seen as the god of the full moon. Over time, the people of Ur associated the god with crescent moons and other phases of the moon.

Nanna plays a spiritual key role in the people of Ur. Nanna governs cowherds' day-to-day lives with the power to bestow fertility, abundance, and prosperity in the people's livelihood.

In the bigger scheme of things, the Sumerian moon god plays a pivotal role in the broader scope of the Mesopotamian beliefs and religion.

The people of Ur also associate Nanna with a woman's menstrual cycle: similar to the change and transformation of the moon.

As the moon is seen as an astronomical part of the world's creation, its celestial traits contribute to how events unfold in the lives of the ancient people of Ur.

Even to this day, Nanna is closely linked to spiritual wisdom. His divination and foresight are attributed to his spiritual abilities to see and understand the past and the future.

People worship him for his counsel and the gifts he has bestowed to the common good of humanity.

Aligning with the Moon Goddesses' Magnetism 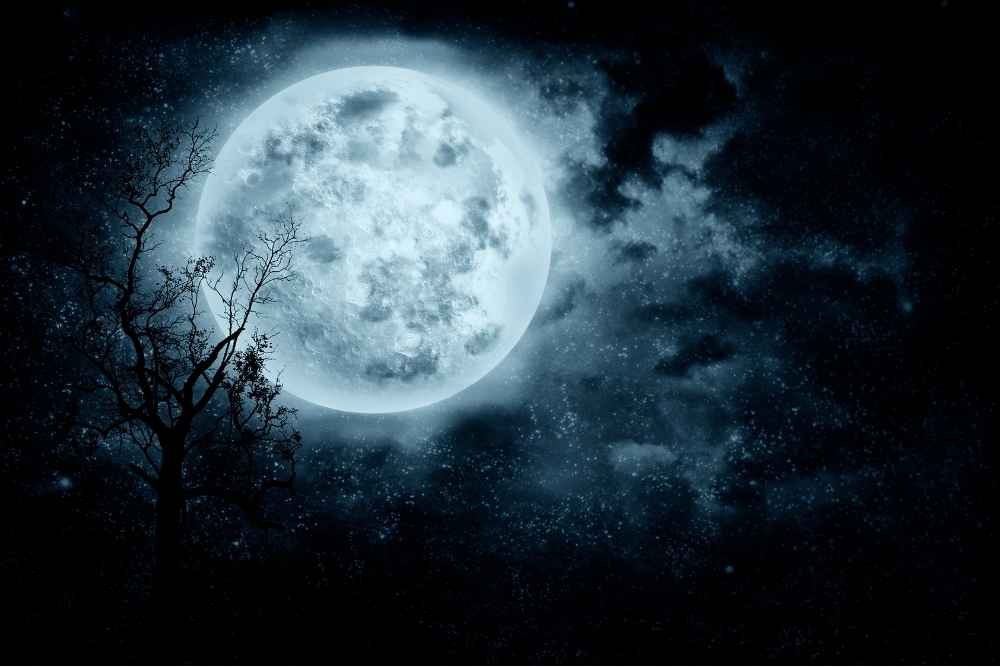 In one way or another, these moon goddesses resemble the energies we hold dear in our hearts. May it be the sense of enlightenment, healing, wisdom, and independence; channeling our energies to the moon's magnetism is one of the ways we can get to know ourselves better.

We are connected with one another. Every fiber of our being is tied to the energies present on the moon. Choosing to tap into the profound powers of our being can lead us right into the beauty of existing. Our consciousness, dreams, and intuition make up the intricate pattern of human life. Indeed, the moon's magnetism leads us into our personal reflection.

The Power of the Moon

The moon has long been associated with emotion and mood. In fact, the word "lunatic" comes from the Latin word for moon, "luna."

The moon is thought to exert a powerful influence on our deepest emotions, affecting everything from our romantic attachments to our ability to bond with others.

Some believe that the lunar cycle can dictate our emotional state, with the full moon corresponding to a time of heightened passion and the new moon representing a time of introspection and calmness.

Whether or not you believe in the astrological power of the moon, there's no denying that it has a profound effect on our mood and emotions.

Want to learn about your personal relationship with the moon in your horoscope? Get this free, personalized moon reading.