Mary Morrissey invites you to join her free dream-building webinar

Do you have unfulfilled dreams you'd like to achieve in 2021?

Now is the time to get a fresh start!

Join expert dream-builder Mary Morrissey, in this free 1-hour webinar that will blow your mind. 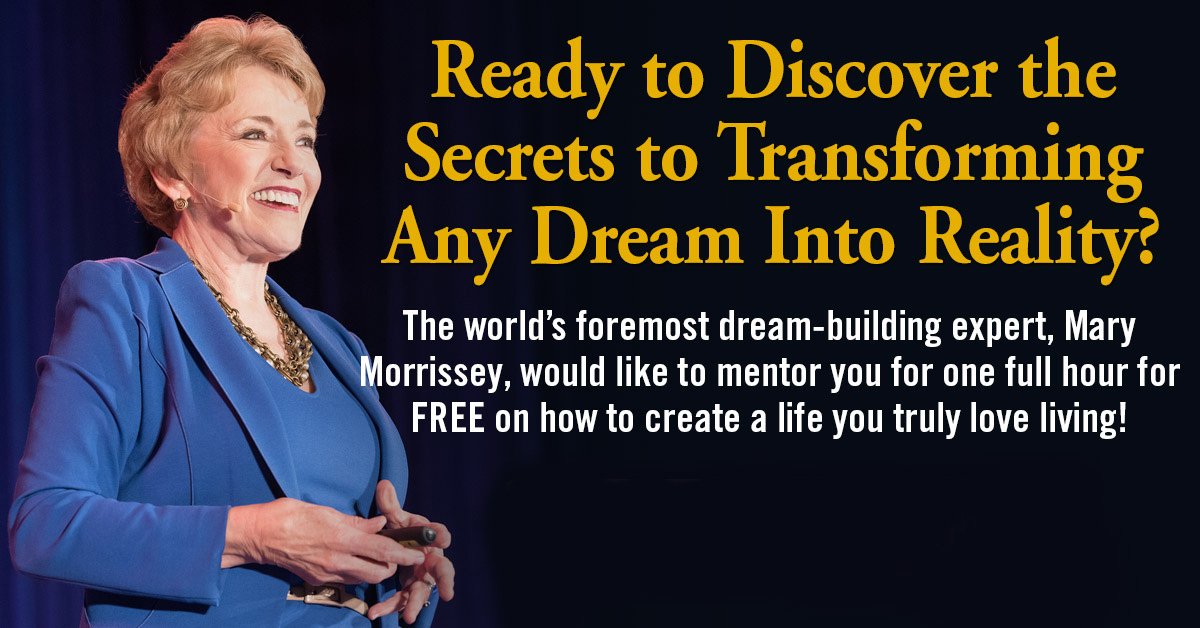 The DreamBuilder program features 12 weeks of powerful teachings so you can achieve your goals and dreams in the fastest way possible. Through 40 years of experience Mary has found the techniques that save you years of struggle should you try on your own.

Join before January 29, 2021, to get free tickets to DreamBuilder LIVE.

The Story Behind Mary's DreamBuilder Program

Lying in bed, confused and scared, Mary Morrissey was waiting for surgery to help her kidney disease. The doctors told her that she would most likely only have six more months to live, even with the surgery.

Just a few months earlier, her son had been born. She feared not being able to watch him grow and up. All her dreams about becoming a teacher were also fading away quickly. The year is 1967, and Mary Morrissey could have been gone before 1968 arrived.

But that night, something happened to Mary that changed the course of her life. A woman entered her hospital room and started explaining the power of our thoughts. The doctors couldn't explain it, but she recovered completely in four months from her fatal condition.

That was almost 50 years ago, and Mary Morrissey went on to see her son grow up, as well as become a respected teacher. She became a spokesperson for the teachings she received that night in the hospital. For the past five decades, Mary Morrissey has continued to expand her knowledge. She possesses knowledge, but she also has a very effective way of teaching anyone the same life-changing principles.

She achieved the success she always wanted and created million-dollar businesses, against all odds.

"Mary is one of our most powerful and enlightened teachers. Breathe in her wisdom."

Do you remember when we were children, how easy it was to dream and envision our lives? As children, we intuitively know how to use our imagination.

Mary Morrissey traveled the country with her four small children pursuing her dream to be a teacher and speaker. This life was not sustainable, and even though she worked harder and harder, it didn't translate into more money.

Can you relate to this scenario?

Good can be the enemy of great. When Mary realized she was stuck, she hired a mentor.

He showed her that working harder was not the answer to reaching her goals.

After applying the principles, he taught her she achieved incredible success without the need to work harder.

Instead, she worked in harmony with certain universal principles.

A Direct Way to Achieving
Your Dreams 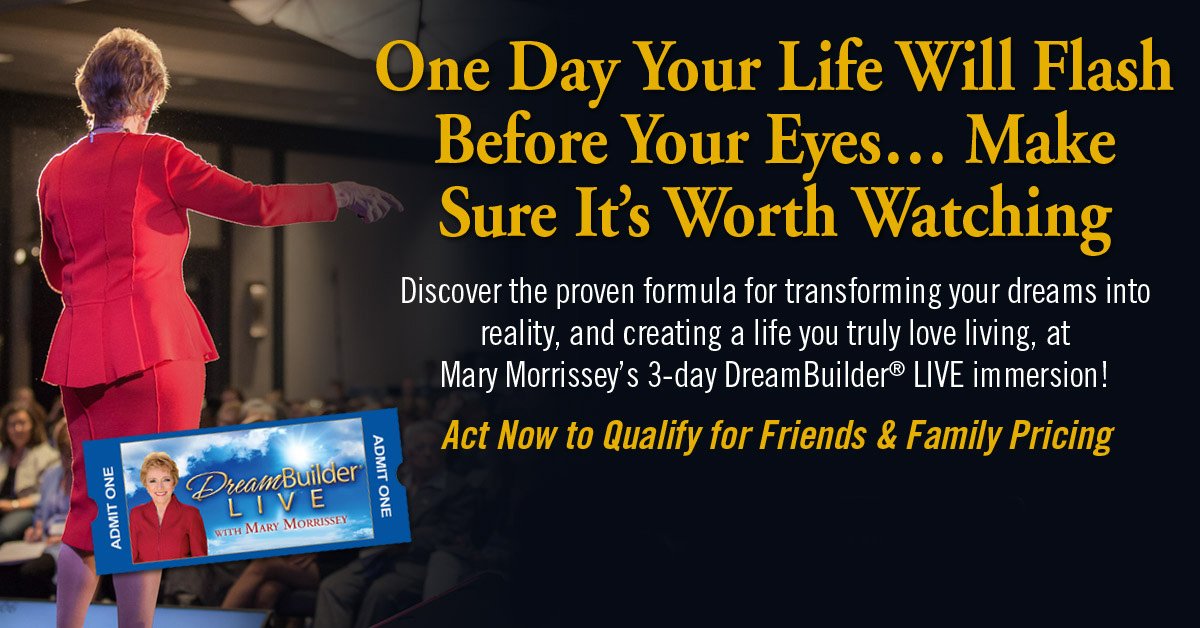 Mary Morrissey created the DreamBuilder Program to be the ultimate system of positive change. Whether it's money, health, or relationships, you'll get powerful techniques to improve each area.

Every second week you'll get to ask questions and get guidance on applying the system to your life situation.

Isn't the journey more fun when you can have friends that support you and cheer for your success?

If you join the DreamBuilder Program before January 29, 2021, you'll get TWO FREE TICKETS to the Dreambuilder LIVE event - a three-day live event with Mary Morrissey that will inspire your 2021 through the roof.

When does DreamBuilder Live begin?

It starts Friday, January 29, 2021. If you join the DreamBuilder program you get 2 tickets for free to this event.

Who can join? Are there any requirements?

Everyone is welcome to join Mary Morrissey on this journey of dream-building.

Is it live or pre-recorded?

Both. The teachings are pre-recorded so that you can re-watch them at your convenience, but you'll also have the tremendous opportunity to ask questions during 6 live events.

Use this guided meditation with Mary Morrissey to unlock your deepest desire. What is it you want most from life?

I've had great results with this meditation. It helps you tap into the creator-power you have within.

Are you stronger than circumstances?

Mary Morrissey is one of the most outstanding spiritual teachers alive. She focuses on the lives we are living here on earth. What we do, feel, and want. That's an essential part of our spiritual journey too! Are you ready to make 2021 a great year?

Download this little ebook from Mary Morrissey entirely for free. It's called Stronger Than Circumstances, and I promise you will get value from it (it's 25 pages and will only take 10 minutes to read). 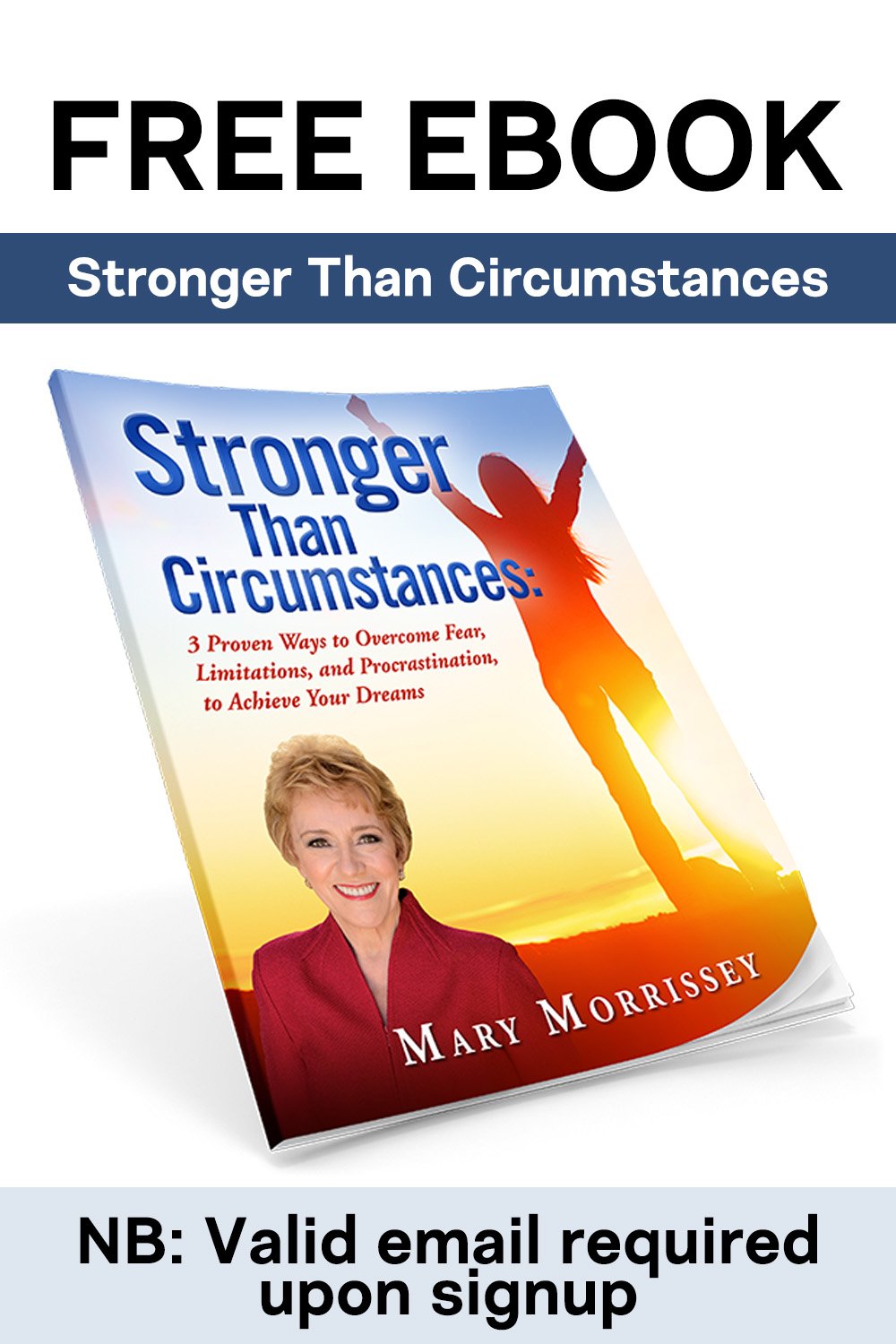 Are you letting the "3 Ds" stop you from living your best life? Are you allowing them to take you away from something you want in life? Find out what they are and become aware of them the next time they show up!

Yes I Want This Ebook!