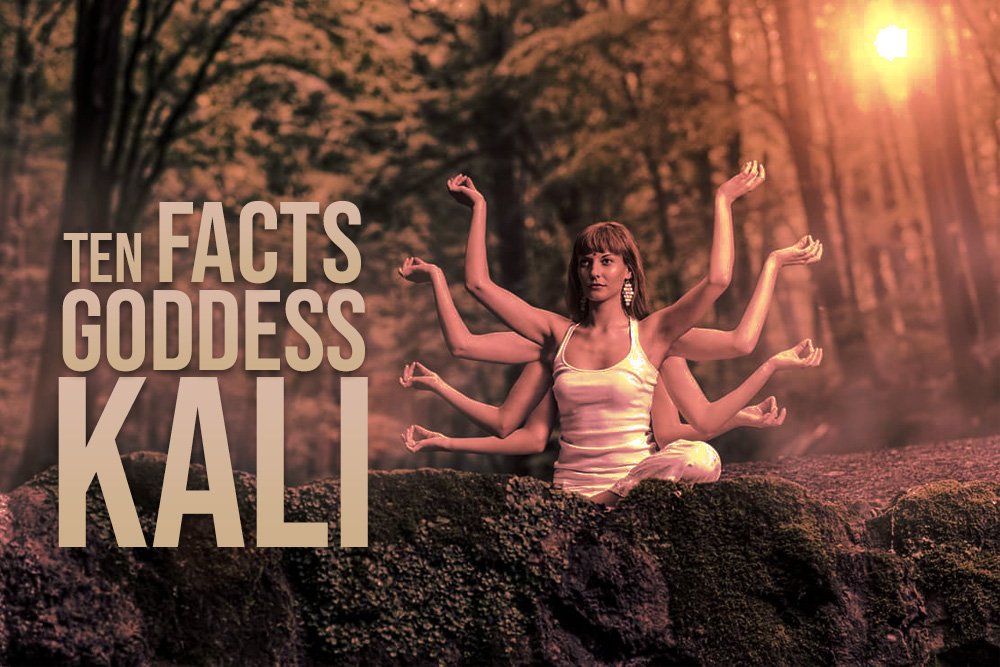 Kali is the Hindu Goddess of Death, Time, and Doomsday.

At first glance, it would be easy to assume that Kali is a feared Goddess, but actually, she is a much loved and much respected Goddess.

She is not only associated with death but with maternal love and strong feminine qualities.

Kali has to be amongst the most interesting Hindu Gods and Goddesses because of her unique depiction throughout Hinduism. Here are ten facts about Kali.

1. Artwork Depicts Her In A Fearsome Way

This first one probably supports the common misconception that Kali is a fearsome Goddess more than it disproves it.

Kali is most often depicted in art as having dark black or blue skin, holding a severed head, while wearing a skirt made of human arms and a necklace of severed heads. 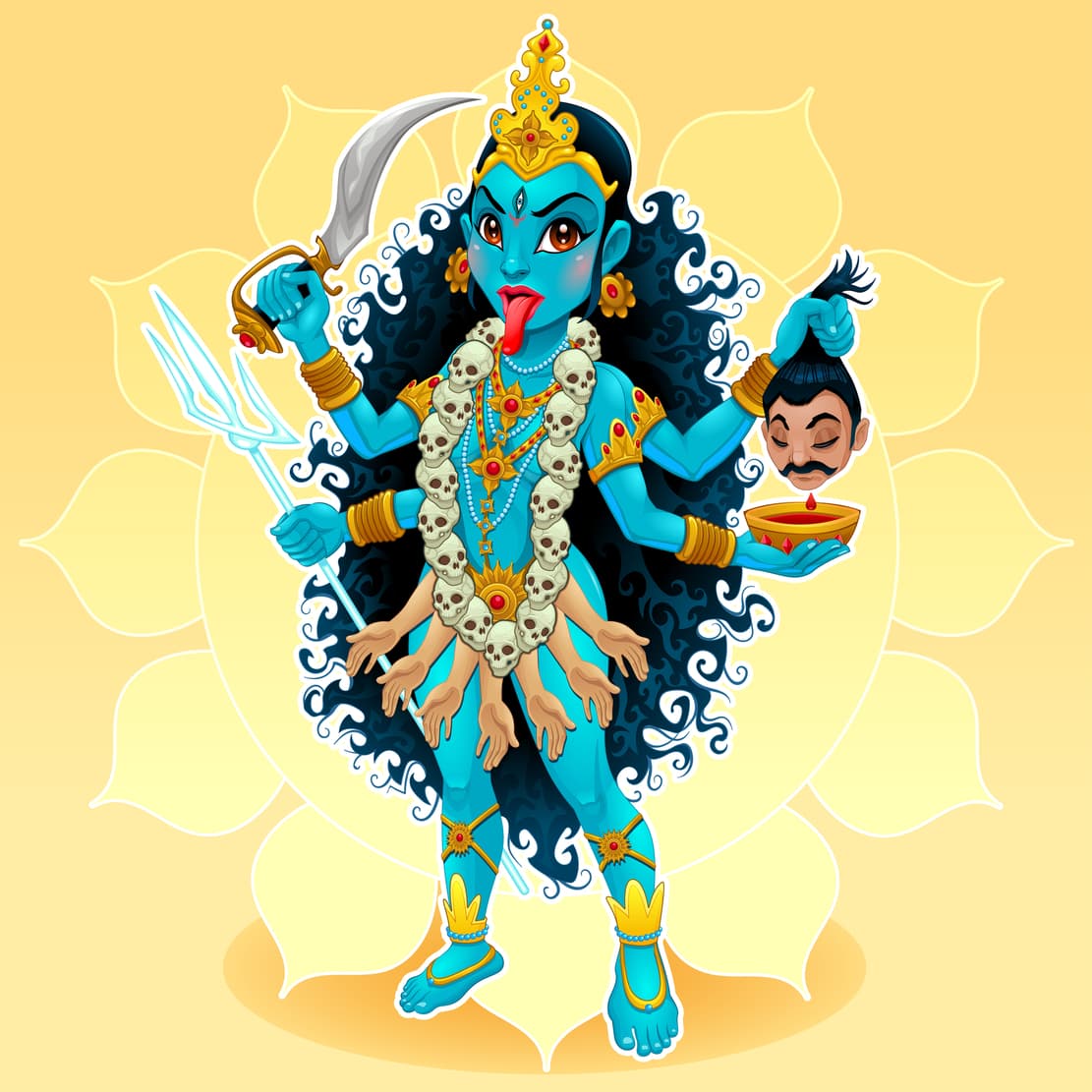 This artwork is not to depict her as a violent Goddess, but instead as a slayer of demons. It's easy to associate Kali as a frightening Goddess, but she is also responsible for demons' death, so she protects the world from darkness.

2. Kali's First Appearance Was A Welcome One

Those who may be less familiar with Hinduism might see the images of Kali mentioned above and be scared into thinking that they never wanted to see another one.

However, Kali was a welcome sight when she first appeared in the Hindu scriptures because she arrived as the destroyer of evil.

Kali is like Shiva in that many people might associate her with negative things, but all of the death and destruction she caused was for the right reasons.

3. She Is Famous For Her Victory Over Rakthabeeja

Rakthabeeja was a terrible threat to the world, an unstoppable force capable of reforming from every drop of blood spilled of his.

Kali was the only Goddess capable of stopping him because she consumed every drop of his blood so that he could never return.

While at first glance, that might seem a little intimidating, a closer look shows that she is innovative and powerful and willing to do anything to protect good from evil.

Unlike some other Hindu Gods and Goddesses, though, her four hands represent other things.

Her first two represent her ability to destroy and rid the world of evil. Her next two tend to express her maternal love towards her children that is both eternal and pure.

In many ways, Kali represents a fierce mother figure willing to do anything to protect her children. That message in itself is pretty powerful.

5. Her Name Has A Meaning

Kali in Sanskrit translates to "she who is black" or "she who is death." Despite this quite ominous meaning, Kali is often depicted as a naked beauty in the artwork. 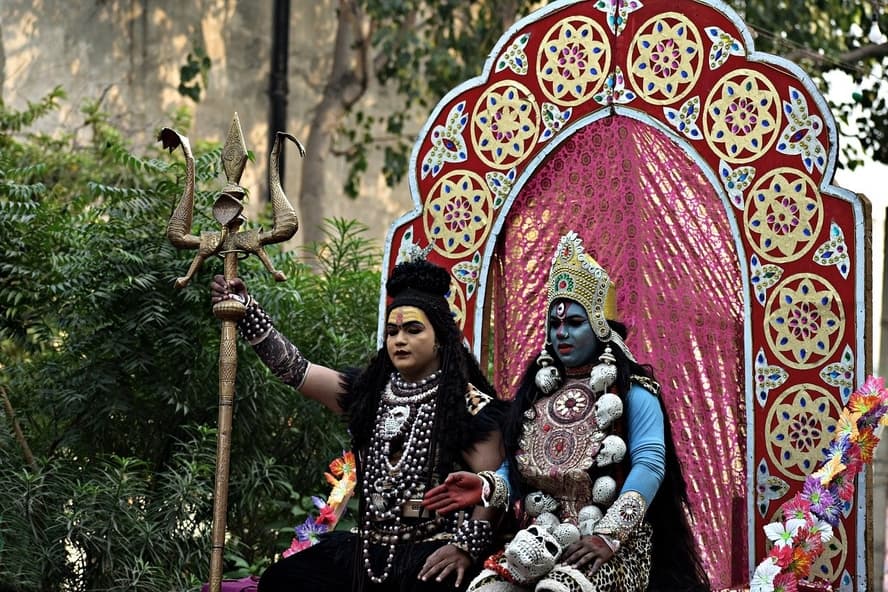 From a parade celebrating Kali and Shiva. Dressing up like Kali is a way to channel her energy.

This doesn't mean that she is considered beautiful in the traditional sense, but her beauty comes from light, power, and her desire to see good conquer evil. Her name might be synonymous with death, but Kali tends only to destroy life in the name of preserving others.

6. She Is Born Out Of Anger

Ancient Hindu text describes Kali's creation as being from Durga, a Goddess who created Kali during a fierce battle with demons.

Durga's anger was said to be so great that it took on the physical form of Kali, and the Goddess of Death was born. Interestingly though, there is a lesson to be learned from this.

Kali may have been born out of anger, but she learned to love. After all, her fierce love for protecting her followers against evil forces causes her to do the violent things she does.

Although Kali may have been first discovered in Hindu Ideology, she appears in Tantric Ideology too, and you can learn a great lesson from her appearance there.

It is said that facing and dealing with death's terror is essential to accept the blessings of life.

In other words, one must be comfortable with the notion of death to enjoy life truly. That's a necessary lesson for anybody, regardless of their ideology.

8. Kali Is A Manifestation Of The Divine Mother

There are many things about Kali that link her with maternal love, but in Hinduism, she is believed to be one of The Divine Mother's manifestations. In other words, she represents an aspect of motherhood that all women embody. 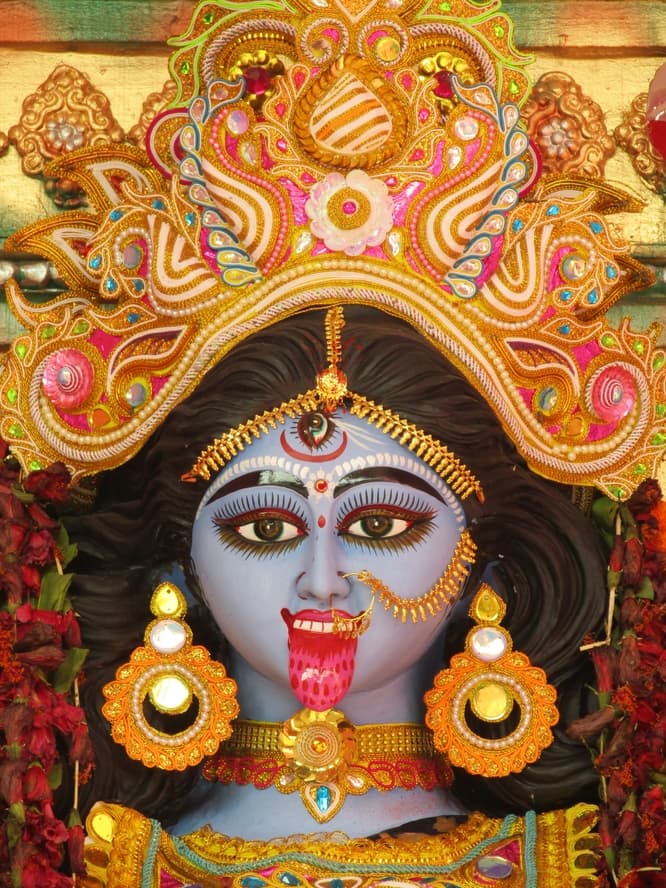 Traditional statue in honor of Kali.

Kali is most often associated with protective motherly love because of her willingness to do destructive deeds in the name of good. In theory, there is an aspect of Kali in every mother, though admittedly probably not as violent.

9. She Is Arguably The Most Powerful Deity

Many people in the Hindu community would argue that Kali is the most powerful deity.

This is because she possesses a strength of will not present in lots of other Deities: a willingness to do violent and often dark deeds to destroy evil.

As an aspect of The Divine Mother, the argument that she is the most powerful deity is an interesting one because it argues that a woman, and motherly figure, is more powerful than all else. That could be an empowering message for new mothers everywhere.

10. She Teaches Us That Uncontrolled Anger Is A Shameful Thing

She might be the Goddess of Death and one of the most powerful and destructive Deities in Hinduism, but she also teaches us that uncontrolled anger is a terrible thing.

After she kills two demons, her rage is so uncontrolled that she begins to celebrate by dancing on the bodies of the demons she has slain. Kali is unable to be calmed until she accidentally steps on the God Shiva.

The moment she does, she realizes her mistake and becomes ashamed of her uncontrolled anger. It's a valuable message that anger that is not under control can lead to acts that one never intended to do.

Hopefully, these ten facts about Kali have proved to be interesting. As an often misunderstood Hindu Goddess, this post has hopefully provided some insight into the reasons behind Kali's violence and shown that she is a pure Goddess working for good, not evil.