Who are the Archangels?

Archangels are spirits who come to us with love, understanding, acceptance and deep compassion.

They work for God and ensure we get the best while offering us multiple options to choose from. But they do obey the law of free will: that is, they want to empower you but they give you space to make your choices.

They never push or force you to do anything, but rather, they support and encourage you.

Find out who your guardian archangel is. 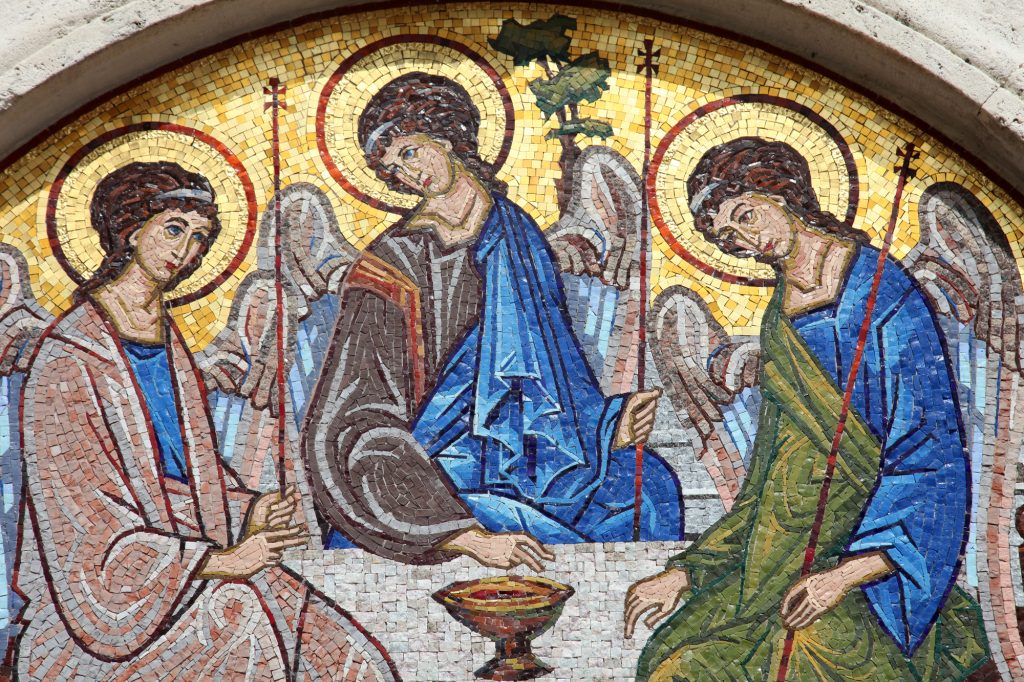 What are the differences between Angels and Archangels?

The best answer to the question would be defining angels and their responsibilities. An angel is the name of an “office” and not the nature of someone.

Therefore, angels are spiritual creatures which are intelligent and immortal. Catechism of the Catholic Church 329 329-330 says that they are the messengers and servants of God.

The catholic church believes that angels live in heaven, and they were created before humans. There are three types of angels, i.e. guardian angel, pattern angel and healing angel.

Therefore, since archangels are higher in standing than angels, then it means they are messengers of God, but they are assigned the most important jobs. Also, archangels wield more power than the angels due to their higher rank.

Wish you had a personal guardian archangel? You do. Find out who it is (done for you freely). 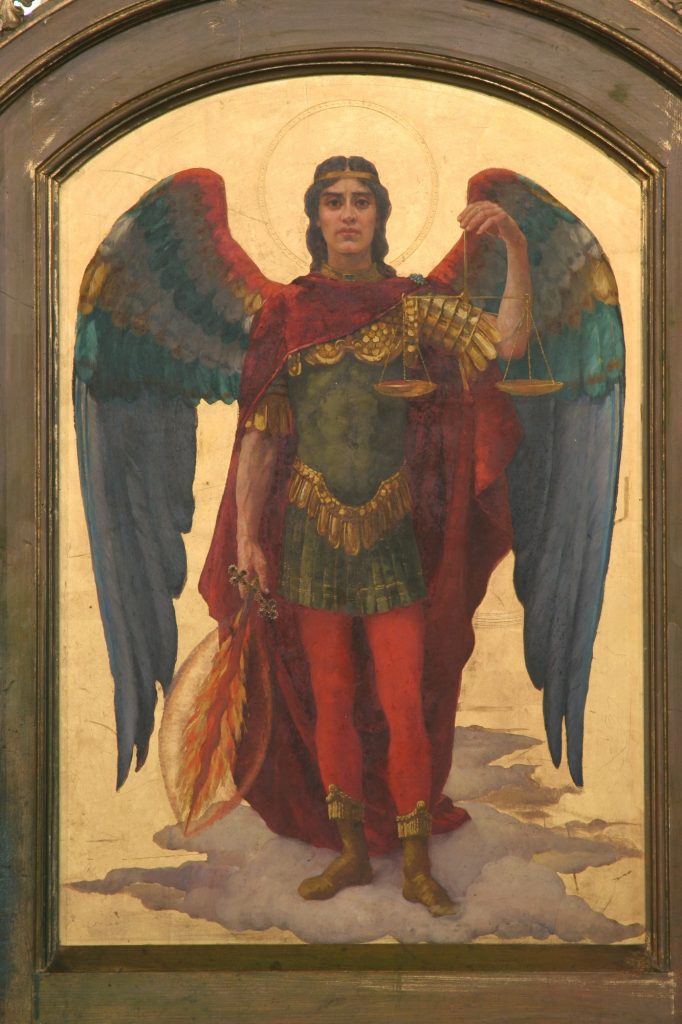 Michael is the leader of the archangels and also the most popular. His name, Michael, is a personal name which means “Who is like God”.

His name is present in the old and new testament with the notable one being the book of Daniel, where his name appears twice.

In the book of Daniel, Michael appears to Daniel in a vision with the visit leaving Daniel weak and lacking the appetite for weeks. (Daniel: Chapter 12).

Though the bible mentions that there are other archangels such as Lucifer and Gabriel, he remains the only angel to be called “archangel” in the book of Jude 1:9. He has three main roles:

In the new testament, we can see Michael in a fight with the devil over protecting Moses’ body (Jude).

In the book of Revelation 12:7, I quote “A war started in the heaven and Michael, together with his angels, fought the dragon and his angels”. The dragon, in this case, is Satan and Michael is leading in the front by waging war to the devil and his followers.

We can also see Michael fighting the devil to protect a woman and her young son. In this case, Michael is fighting with the help of some angels and the devil is in “dragon” form.

Michael is also depicted as a true defender and champion of God’s people.

In the book of Daniel 12: 1, the scripture says that Michael will stand up on that time as he is the prince who watches over the descendants of your people.

The scripture, in this case, means to provide aid or to help and the sons of your people means Daniel’s people who are the God’s saints and descendants of Israel.

You can also interpret the verse in Daniel to mean the faithful Christians in today’s world, as mentioned by Paul in Galatians 32:9. Paul says that anyone belonging to Christ is a seed of Abraham and the heir of the promises.

3. Bring the faithful To Heaven when they die

According to the catholic church, archangel Michael visits the faithful believers when they’re dying, or they’re in transition.

Believers say that Michael escorted the first soul of Adam to heaven. And when Adam died his wife Eve and many angels in heaven plead for Adam’s soul to be taken to heaven as mentioned in chapter 33 where they beg him since Adam is of his image and should go to heaven.

God then allows Adam, soul, to heaven and instructs Michael to take his soul.

The portrayal of Michael as one who takes souls to heaven is the main inspiration behind the song “Michael, Row the Boat Ashore”. He is also referred to as a psycho-pomp which is a Greek word for an angel ferrying souls from the land of the living to that of the dead via a river.

To communicate with archangel Michael, simply make a plea and ask for courage. And in a split second, you will notice his powerful presence fill you.

Discover if Michael is your guardian archangel now. 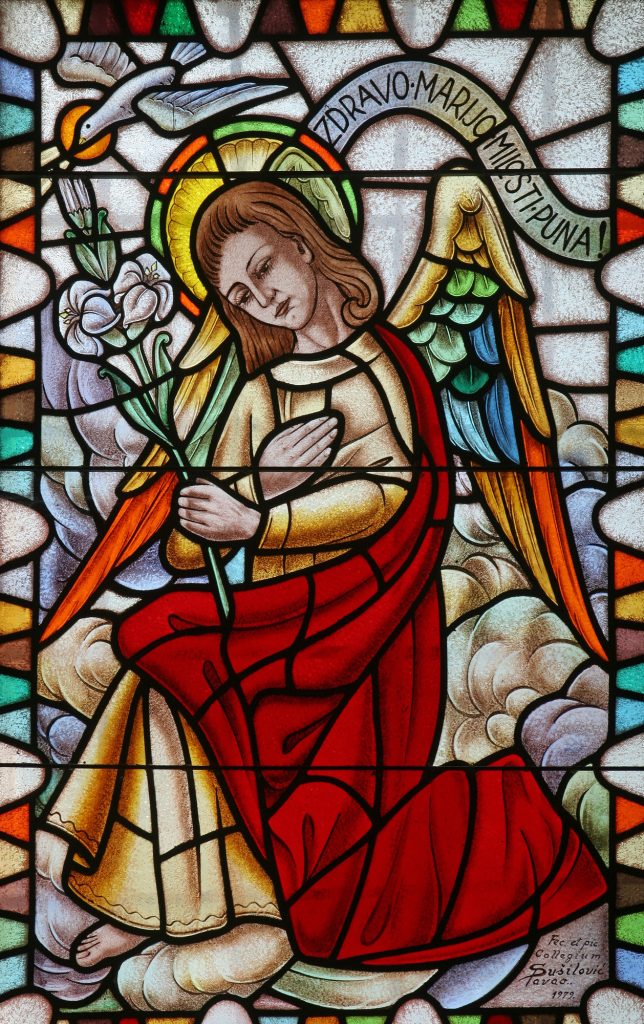 The name Gabriel means “power of God”. Just like Michael, Angel Gabriel is one of the angels who’re very close to God and is often has many roles based on different traditions.

Overall, he is seen as a great defender and protector, and his pictures usually show a man with a sword.

Gabriel is a defender of the right things, and he can offer protection, strength and courage when you need it. With his presence, you will be more reassured and powerful.

Besides, he helps in healing situations by strengthening your determination of healing and encouraging you to find your true self.

He provides you with energy and determination to fight various ailments, mental conditions and harmful relationships.

The only way of communicating with angel Gabriel is by seeing him in your dream as you receive unearthly signs.

Learn if Gabriel is your Guardian Archangel and know how to grow this relationship. 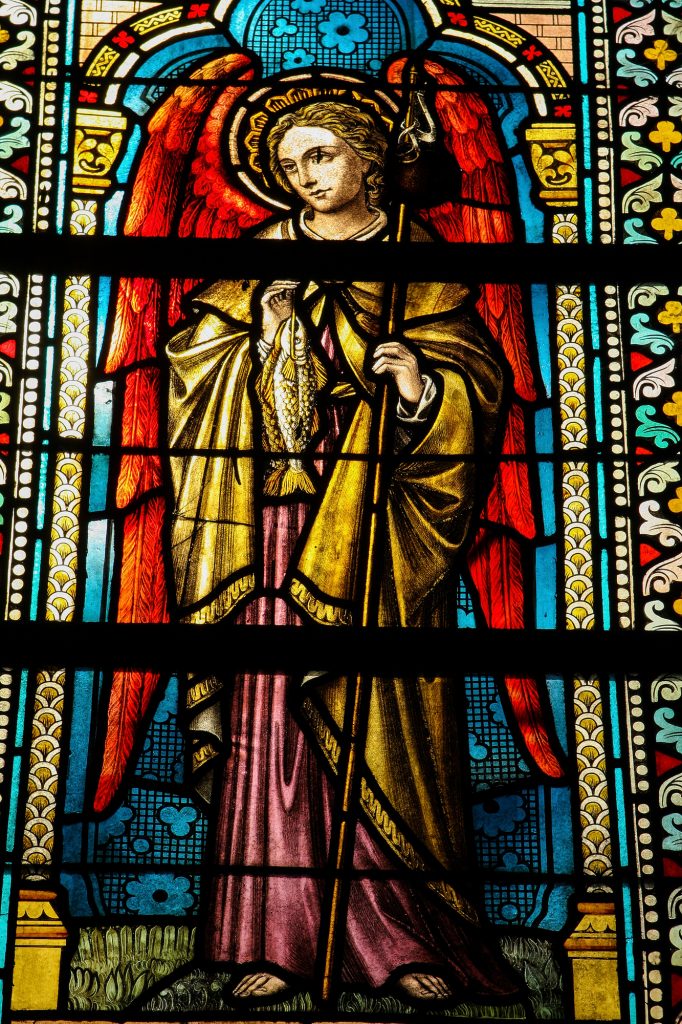 In the bible, archangel Raphael is famous for his healing prowess.

He is famous for his compassion towards people struggling emotionally, mentally, physically or spiritually.

He works to ensure people come nearer to God so that they can enjoy the peace he wants them to enjoy.

He is often associated with laughter, joy and happiness.

And at times, a person can ask him for healing on different conditions, help them find love or enable them to reach their destinations while travelling safely.

He appears in the Book of Tobit which is a catholic book, and the book portrays his health healing abilities.

To communicate to Raphael, hold a crystal in your hand and dedicate it to the archangel by stating your name then invoking the name of “Archangel Raphael”. Raphael may be your personal guardian archangel by birth.

Though he is less popular than the first three archangels, angel Uriel helps us to appreciate our own company without feeling lonely or explore our inner self to solve even the most profound mysteries.

He is also known as an “angel of wisdom”. His drawings are of an angel carrying a book or a scroll. Uriel means “fire of God” or “God is my light”.

Most believers seek Uriel for help before learning new information, making a decision, solving a problem or resolving a conflict.

He also helps one to get rid of destructive emotions.

The book of Enoch gives a picture of Uriel as one of the seven archangels who govern the world. Discover if Uriel is your Guardian Angel.

In Enoch chapter 10, Uriel warns Noah of the incoming floods.

To communicate with Uriel, close your eyes then talk to him silently or loudly in your heart. After you finish, show gratitude for his help then take some few deep breaths and open your eyes when you are ready.

Archangel Sandalphon is in charge of singers, musicians, composers, prayer and poetry.

Without Sandalphon help, these successful individuals will not enjoy their success and magnificent talent.

In prayer, Sandalphon is important, especially when you feel your prayers are not being answered.

You need to seek Sandalphon, and he will deliver your prayers to the divine so that they’re answered.

In the music fraternity, Sandalphon is a master and knows the different music genres as well as the genre of any music.

He will help you choose the genre which your music falls into. He will also give you excellent sound therapy which will raise your sound vibrations hence improving your moods.

Sandalphon is also the tallest of the archangels, and he can reach heaven when he stands from the earth.

From this feature, he advises maintaining the balance of the earth life and one which is yet to come (heaven life).

Sandalphon also asks you to help yourself and others around you.

When you feel down, he will help you through music, and you only need to analyze your environment to connect with him.

Finally, the best way of communicating with Sandalphon is through prayer.

There are many archangels with the most popular ones being the ones above.

Each of them has a unique role, and it's upon you to know what you want and which angel can help you receive it.

Turn to these archangels today to help solve your health, mental, emotional or financial problems.

To learn even more about the archangels, and know which one of them is watching over your life, click the link below.

You'll be given a free report that shows you exactly which archangels you resonate the most with, and which angel chose you at birth.

Discover which archangel is your personal guardian.